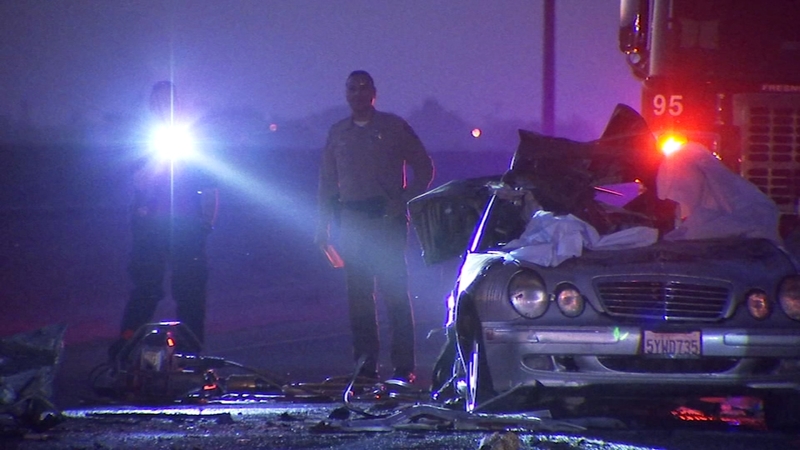 FRESNO, Calif. (KFSN) -- Twisted metal and debris left scattered at the scene of the fiery crash that left two people dead and one in custody.

"It's horrific, but its nothing compared to what the families will go through," said California Highway Patrol Sgt. Lenny Sherman.

Police say the suspect is 42-year-old Silvia Gonzales, and that she was under the influence of marijuana, and another illegal drug when she caused the crash.

Investigators say Gonzales's Honda was driving behind a Mercedes along Colorado Road near Sumner and failed to brake.

"The driver of the Honda failed to stop and or even use or brake and rear-ended the Mercedes at a good speed," Sherman said.

The hit caused the Mercedes to spin out of control and swerve onto the other lane, where it was then hit by a pickup truck.

Police say it burst into flames, killing the two passengers inside.

A 38-year-old driver and a 1-year-old child were inside the pickup truck - both who were taken to the hospital for moderate to minor injuries.

Officers arrested Gonzales after saying she seemed impaired. Investigators say they later found this box filled with marijuana and rolling papers in her car.

This is what officers say they found in the suspects car. She’s been arrested for felony DUI, however, officers have not disclosed her identity just yet. @ABC30 pic.twitter.com/Fyc4KAxWaD

"The poor families that are losing people because of these people using drugs that are recreational," Sherman said. "Or think they're recreational and get behind the wheel and cause big tragedies."

One of those suffering is Alissa Villanueva, who says her grandparents, Janie and Nick Flocchini, were the two who died.

"I literally saw it on the news and broke down crying. I knew it was them," Villanueva said.

Villanueva is left heartbroken, reminiscing on the final words she shared with her grandparents.

"The last thing that I told my grandma was that I loved her," she said. "I'm really hurt. I don't have words to explain."

#Breaking: Fresno CHP at the scene of a double fatal car accident involving 3 cars near Tranquility. One of the victims is an adult, and the other is a child. CHP officers tell me one person has been placed under arrest for felony DUI. @ABC30