Creek Fire: Dozens airlifted from raging wildfire, brought to Army base in Fresno

Several people trapped by the devastating Creek Fire were airlifted out on Tuesday morning. At least three different flights landed at the Army National Guard Base.
KFSN
By Dale Yurong and ABC30.Com Staff 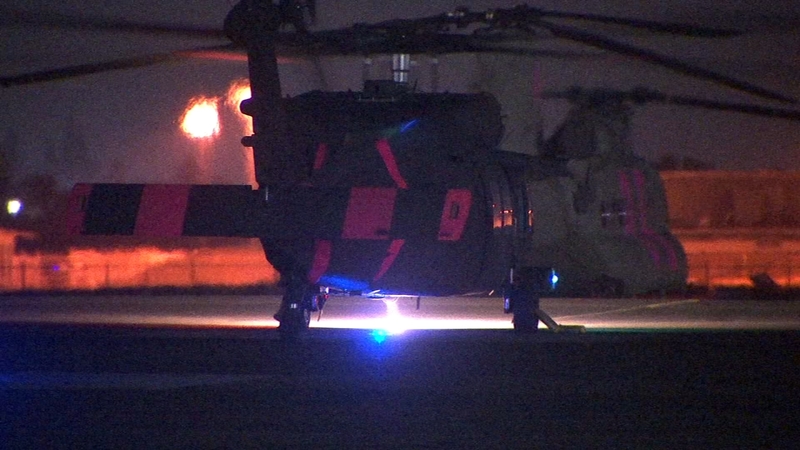 FRESNO, Calif. (KFSN) -- Several people trapped by the devastating Creek Fire were airlifted out on Tuesday morning. At least three different flights landed at the Army National Guard Base.

Starting at 3 in the morning, a Blackhawk helicopter and a Chinook helicopter made eight trips to and from Lake Edison and transported 152 people trapped there by the flames.

In total, rescue choppers pulled 164 people from the Sierra National Forest through the morning and were working to rescue 17 others, Gov. Gavin Newsom said during a press conference on Tuesday. He said pilots wore night-vision goggles to find a place to land.

The officers had travelled to Florence Lake, Edison Lake and Mono Hot Springs on Monday to help evacuate people there. When conditions worsened, the officers, along with 142 hikers and campers they were able to make contact with, sheltered at the Vermillion Valley Resort at Edison Lake until they were transported to the Fresno Yosemite International Airport the next morning.

Video courtesy of David Angelo showed a group of people who were unable to safely make their way down the hill loading into a helicopter. A couple of dogs were rescued as well.

More video from this morning of 46 people and four dogs arriving at the Fresno Yosemite International Airport after being rescued from Lake Edison by a Stockton-based Cal Guard CH-47 Chinook helicopter. More aircraft are still attempting to rescue others trapped by the #CreekFire pic.twitter.com/lmAWTpmFeC

Action News spoke with 14-year-old Ethan Thao from Fresno, who was on a fishing trip with his family near Huntington Lake. He said he was rescued from China Peak after being trapped for 14 hours.

"It was kind of hard to breathe, but then I got through it because I stayed in the car most of the time. It went by faster because I was asleep," Thao said.

Authorities told Action News 14 people were trapped on China Peak and at least 50 others were trapped at Lake Edison.

A Chinook aircraft piloted by a team of military personnel tried to land and rescue the trapped people, but the smoky conditions made it impossible for the team to approach safely.

Fresno Fire is on scene of a possible Multi Casualty Incident, reports of up to 50 people being rescued and flown in to FYI, will update with more accurate information as it becomes available. Please follow all evacuation orders. pic.twitter.com/VbCQKicdOR

On Monday, Fresno Fire also said one person had collapsed at Mono Hot Springs due to a medical episode and died. EMS personnel could not respond to the location due to the fire. They say the death was not caused by the fire.

This is the second such rescue being carried out since the Creek Fire broke out on Friday.

On Saturday and Sunday, 214 people were rescued from the Mammoth Pool Reservoir in Madera County after they were trapped by rapidly spreading flames.

A Black Hawk helicopter and a large Chinook helicopter made several trips through the night to bring the people back to safety.

Six of those people were taken to the burn unit at Community Regional Medical Center. One of them was released and five are in fair condition.

The Creek Fire has spread to more than 143,000 acres, CAL FIRE officials said on Monday. It's still at 0% containment.