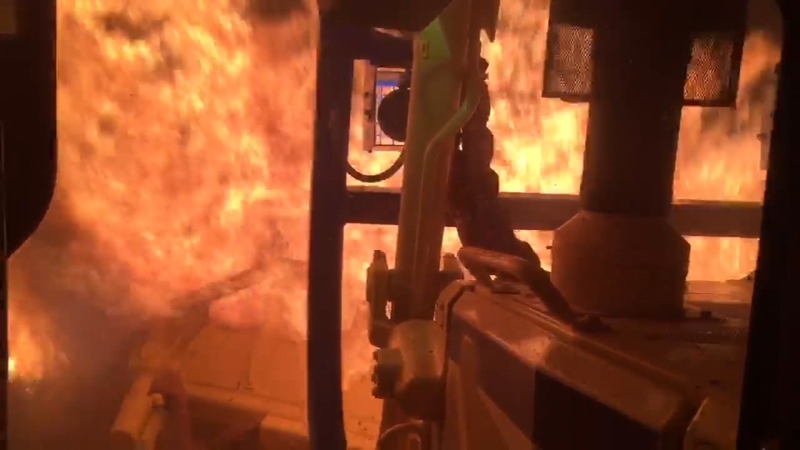 The report reveals Varney was with a swamper or spotter, but the two lost communication after the swamper went to retrieve a replacement part. It wasn't until about four hours later that Incident Command asked aircraft to look for him. Veteran dozer operator Scott Price with the Ventura County Fire Department says often times resources are so stretched, dozer operators have to work alone.

"Every time you run the dozer up on the hill, the dozer is sliding around. Sometimes it's just lucky you don't have an accident," said Price, who is also the President of California Dozer Operators Group.

While the report does not assign blame, it does list several safety concerns and lessons learned. It reveals that the 36-year-old was working on a steep, narrow trail with a more than 60 percent grade and multiple switchbacks. He and his 42,000 pound machine ended up tumbling 220 feet down the hillside. Prior to that fall, he had slipped three times on that slope. Price says rollovers and burnovers are a dozer operator's greatest concerns.

"That happened to me yesterday morning, we had a fire here...started going up the ridge line. I got in some soft material and the whole thing gave way. I slide off the ridge about 5 feet," said Price.

The report recommends that working alone on the fire line should be an anomaly, not the rule. It also writes that the first three near-misses should have been an indicator for a potential roadway failure.

"There is a hazard, now everyone is a little more heads up, everyone is slowing down a little bit, maybe not going as fast across the ridge as before," said Price.

Price says Varney's death serves as a reminder to everyone the dangers of the job, especially when there were 4 firefighter deaths alone in July.
Report a correction or typo
Related topics:
mariposa countymariposa countyforest firefirefighter killedwildfirefirefighter injuredfirefighters
Copyright © 2021 KFSN-TV. All Rights Reserved.
WILDFIRE