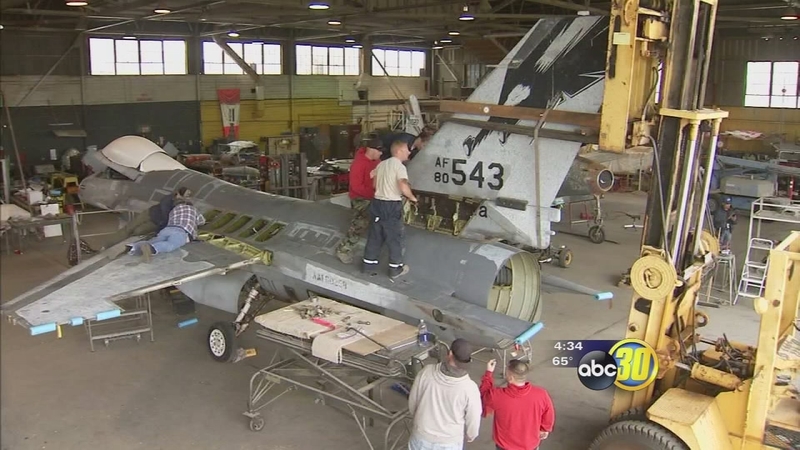 MERCED COUNTY (KFSN) -- A piece of Fresno's military history is coming back to life in the North Valley. Some elbow grease and special tools are getting an F16 ready for its next mission.

The Fighting Falcon began serving our country in the early 1980's and ended its career with California Air National Guard's 144th fighter wing in Fresno. It was then stored in Tucson until Castle Air Museum sealed a deal to bring it back to the Valley.

"We had our choice of 10 different aircraft tail numbers on the F16. We chose this one because of its significance to the region and the Valley, and the whole West Coast," said Joe Pruzzo, Castle Air Museum.

Seven veterans who volunteer for the museum made the trip to Arizona last month-- along with members of the 144th. They disassembled the aircraft so it could be driven to Merced County, and now they're putting the pieces back together again.

"It twings the heart, it makes me feel very proud that I was involved in the teardown and the put together, and hopefully, will be involved when it goes out in the front line," said Pat Patton, Vietnam veteran.

The project holds a special place in these veterans hearts because they want future generations to understand military history and all of the sacrifices made for freedom. And F16's are still flown by the 144th's detachment, one at March Air Reserve Base in Riverside. That's where Master Sergeant Nicholas Hilker is based.

"It's been my life for the last 18 years. Hopefully, it will be for the next 10 or 12, but it's good to see it in museums. Being a little kid, seeing all this stuff and then other little kids being able to see it, and it being a Fresno tail, is just even more special."