Fire crews responded to the Barrows Training & Education Physical Therapy on First Street and Bullard Avenue around 10:30 am.
KFSN
By Jessica Harrington 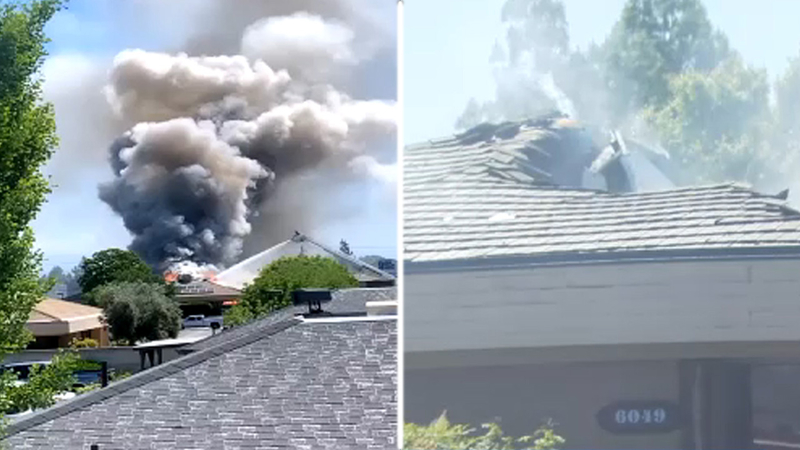 FRESNO, Calif. (KFSN) -- A massive fire in northeast Fresno sent flames shooting from the roof of an office building and smoke hundreds of feet into the air.

Dozens of people raced to safety, as crews battled the flames.

Alyssa Kincaid who works inside Barrows Training and Education Physical Therapy says a little more than a dozen people were inside the building when the fire broke out.

"One crew members came up to me and asked that we get everybody out as soon as we could. So as soon as that happened I knew that something was going on," said Kincaid.

She said there was a crew working on the air conditioning on the roof when one of the workers came inside and told everyone to evacuate.

Everyone safely got out as the fire erupted into a two-alarm blaze with flames shooting from the roof and smoke traveling hundreds of feet into the air.

Staff who work at the building say there was a crew working on the roof on the AC. Those workers came in & told them to evacuate. There was 12-15 people inside at the time. Everyone got out safely. @ABC30 🎥: Alyssa Kincaid pic.twitter.com/2ZrGZ1Yrwa

Fresno Fire said the fire broke out around 10:30 a.m. Friday.

When crews arrived, the attic was already fully involved.

Surrounding businesses were evacuated as firefighters worked to prevent the fire from spreading to other buildings.

"We got some wind that kicked up, that started throwing embers... and that's why the neighboring structures were such a priority," said Fresno Fire Public Information Office Shane Brown.

Because of the amount of resources battling the fire, Fresno Fire had to temporarily suspend service to medical emergency calls.

Fire officials confirmed there was a crew working on the roof at the time the fire broke out.

I talked to the AC crew off camera. They say they just started working and noticed smoke or dust coming from the attic. They went and checked, saw the smoke and told everyone to evacuate. @ABC30
🎥: Eric Garcia pic.twitter.com/UFu20JxQw4

"We have no idea if that had anything to do with the cause of the fire. Our investigators are here on scene and will be following up to investigate the cause," Brown said.

Kincaid said thankfully Friday was only a half-day at work, meaning less people inside.

She says on a normal day, there's twice the amount of people there and things could've been very different.

"We don't know what we're doing next, but we're a team so we'll all stay together and just figure it out as a family," said Kincaid.