Fresno Fire officials said the building was once a radio station but had since been abandoned.
KFSN
By Vanessa Vasconcelos and ABC30.Com Staff 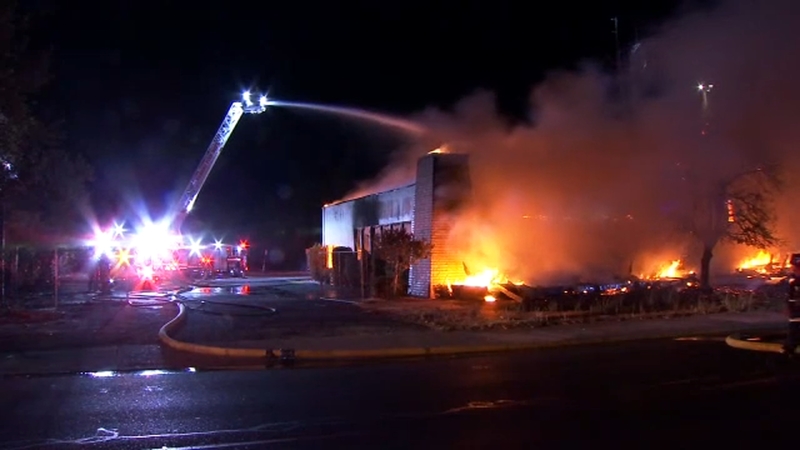 FRESNO, Calif. (KFSN) -- Fresno Fire investigators are looking into what sparked a massive fire at a vacant commercial building that is a piece of broadcasting history.

Crews were called to Shaw and First at around 11:30 Tuesday night.


Helmet cam video shows flames tearing through the vacant building that once housed local radio stations including KRZR, B-95, KCBL and New Rock 104.

Fresno Fire Public Information Officer Shane Brown says, "Conditions reached a point called 'flash-over,' where everything within the structure reaches a temperature where everything in the building starts to catch on fire."

He says the initial call to 911 suggested the fire was small, but when crews arrived, flames had quickly erupted.

Over 30 firefighters kept flames from reaching neighboring businesses and homes. But like most of the city's vacant structures, this wasn't the first time crews were called to the property on Shaw and First.


Brown says, "They've had fires on the exterior because of homeless activity before. The crews are aware of that, so we look at these vacant buildings with a different eye."

Vacant structures pose a threat across the City of Fresno.

Of the more than 600 structure fires crews have faced off against, since January 1, more than 10% were vacant.

Arias says, "We're getting a good response from our property owners. They're realizing it's not going to be cheap to keep your building boarded up, non-secure, not being checked on."

Per the city, debris from Tuesday's fire will be removed within the next 30 days at the property owner's expense.