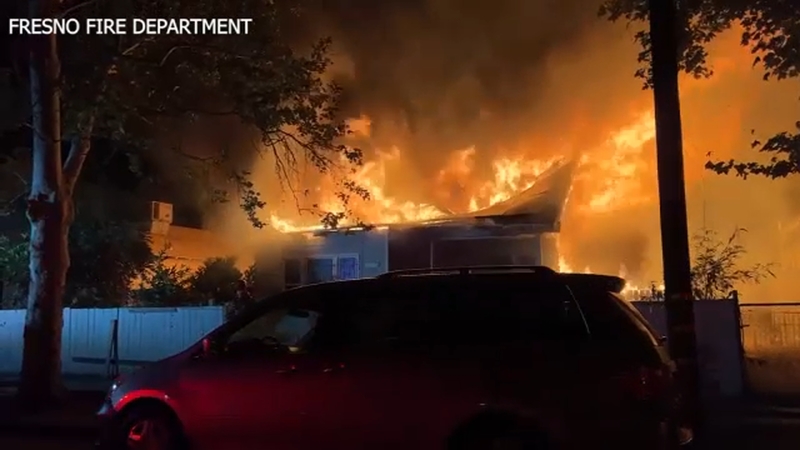 FRESNO, Calif. (KFSN) -- A fire that sent flames high into the air, destroying a central Fresno home may have been started on purpose, authorities said Monday morning.

The fire broke out shortly after 2:30 am on Madison Avenue and Angus Street, near Belmont Avenue and First Street. First responders received multiple calls from witnesses saying they heard what sounded like an explosion.

When firefighters arrived, the house was engulfed in flames, with the entire roof on fire.

Neighbors told crews there were people inside the house. Firefighters rushed into the house but had to leave almost immediately due to the roof's instability.

BREAKING NEWS: @FresnoFire is on scene of a house fire in Central Fresno. Five people were able to safely escape, but their house is destroyed.

Battalion Chief Tony Escobedo sent me this video of what the flames looked like when crews arrived. pic.twitter.com/DpZ2Emqt7Z

It took crews 40 minutes to contain the fire.

Five people and three animals inside were able to escape the fire. One person was treated for smoke inhalation, but no one else was seriously injured.

The family told investigators they believe someone they know started the fire. Authorities are now investigating the fire as a possible arson.