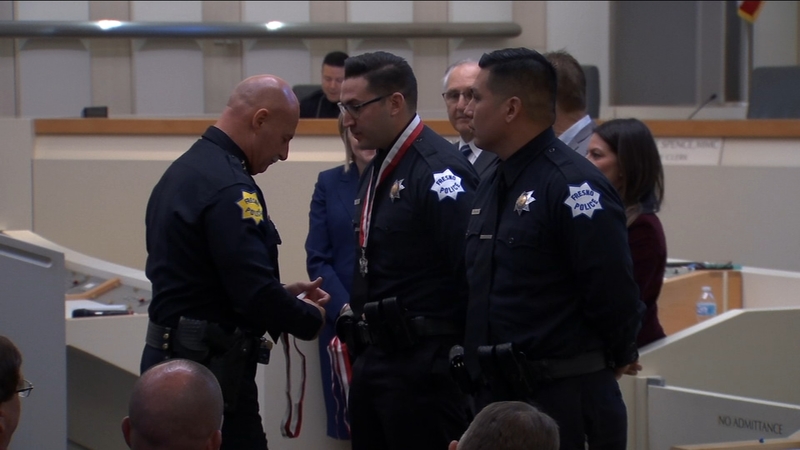 FRESNO, Calif. (KFSN) -- Some of Fresno's finest were given awards for acts of bravery Tuesday.

"All the efforts of these officers day in and day out is what the citizens of Fresno don't get to hear about so we want to take the time to recognize their heroic efforts publicly among their family and present them with medals and say thank you," said Chief Dyer.

Among the standout recipients was Officer Josh Pantages.

The 14-year veteran of the department was recognized for his work while on patrol.

Pantages alone is responsible for over 500 DUI arrests across the city.

"Today means a lot to me because I'm able to be here and honor those victims that did not make it home due to the hands of a DUI driver," said Officer Pantages.

The award came during a somber moment for Pantages.

"Before this ceremony, I came from a funeral," Officer Pantages said. "I had a friend who drank, made a choice and drove and didn't survive getting everyone home safely it comes back to that."

The department also recognized Detective Angie Isaak for her outreach in the community.

Over the last 16 years, she has organized close to 500 block parties and events like Santa's Village in some of Fresno's most challenged areas.

Chief Dyer calls her the driving force for bringing broken neighborhoods back to life.

"About three years ago other agencies started contacting us telling us we want to do what you're doing. It makes me feel good that we're doing something positive," said Det. Isaak.