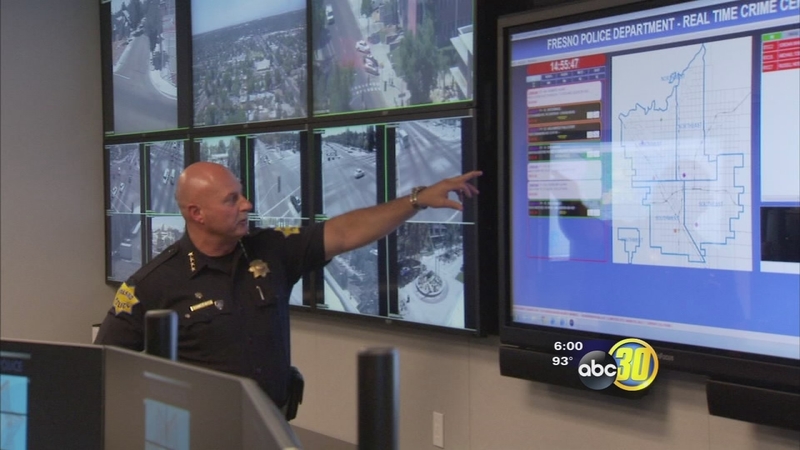 FRESNO, Calif. (KFSN) -- The Fresno Police Department is taking law enforcement into the future in a Real Time Crime Center they unveiled Tuesday.

It's a technological marvel, rivaling real time crime centers you might see in New York City, Chicago or Los Angeles. And it came much cheaper, with a price tag of zero dollars. But it's so good, some wonder how to keep their lives private without staying inside their homes.

For police officers, a 911 call can mean a life threatening situation is seconds away, but what's behind the door they approach may be a mystery.

Chief Dyer is hoping to shed light on the unknown and unseen by using his newest crime-fighting tool -- the Real Time Crime Center. The most serious 911 calls will be funneled here, where officers will use the latest technology to fill in some of the blanks.

Five months ago, Action News reported on the threat assessment tool known as Beware. It uses public records and social media posts to determine how dangerous people at an address may be. Officers in the crime center will share that information with officers responding to the call, and they'll check hundreds of video policing and traffic cameras in the area. In the future, they may have access to even more cameras.

"Ultimately what we want to have is not only video policing cameras and our traffic cameras and cameras from Fresno Unified School District but also cameras from the private sector - hospitals, shopping centers, banks and convenience stores," said Dyer.

Civil rights advocates tell us the new crime center gives police too much access into our private lives. Chief Dyer says this is the future of policing and his department is only accessing publicly available records and private cameras from businesses who want police to monitor them.

"I believe there's always going to be the concern about Big Brother when you're dealing with technology," he said.

Right now, the center is staffed by officers on modified duty, usually for injuries. It's not monitored every hour of every day yet, but Dyer is hoping to get there in the near future.