Fresno State coach speaks out after fight at Bulldog Stadium, arrests made 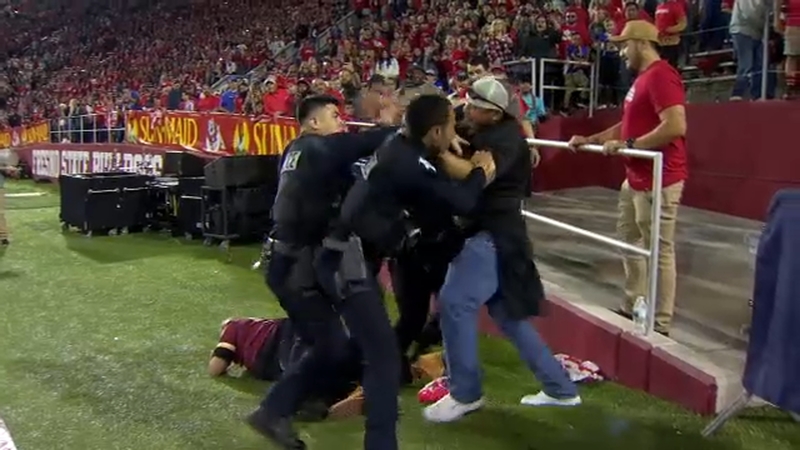 Arrests made after violent fight breaks out at Fresno State game

FRESNO, Calif. (KFSN) -- "This program is run from top to bottom with class, and the people that support it and come to our games are the same way. Unfortunately, you have an incident and we got to make sure we do everything we can to not have it happen again," says Fresno State football coach Kalen DeBoer.

The brawl lasted several minutes and spilled out of the stands and into the concrete concourse below.

Boise State would go on to dominate the Bulldogs but after the game, many took to social media to watch the fight unfold.

RELATED: Arrests made after violent fight breaks out at Fresno State game

Videos of the violent scene have since gone viral.

"We just got to be smarter and understand that's not going to be accepted here, that's not what we stand for," said DeBoer.

Our own Action News camera caught one of the men swinging at Fresno police officers as they tried breaking up the fight.

Fresno State Police would not talk to us on camera but did say multiple people were arrested Saturday night for their involvement in the brawl.
Coach DeBoer was left to answer questions about the incident during his weekly press conference Monday.

"Ninety-nine percent of who was in the stadium, more than that probably, came here for sheer entertainment," he said. "We really don't want you here if that's what you're coming for."

Armando Gonzalez, an eyewitness, caught about six minutes of video of the fight on his cell phone.

"Sold out crowd, a lot of alcohol, a lot of fighting going on after halftime," Gonzalez said.

Alcohol was banned from Bulldog Stadium in 2006 but allowed back in 2017.