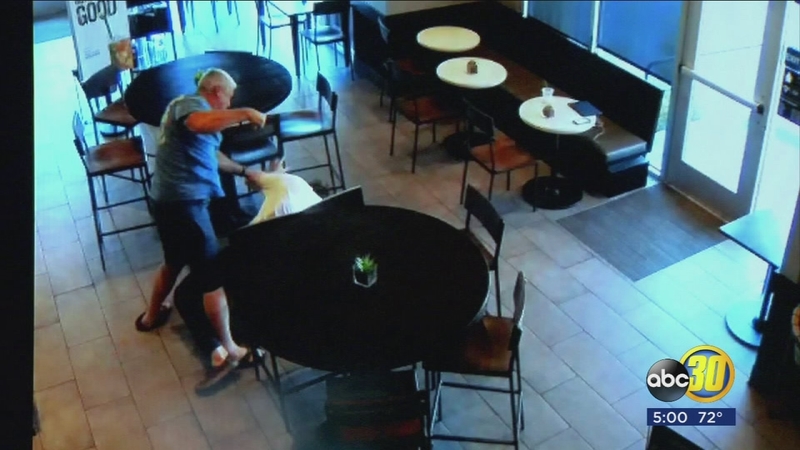 FRESNO, Calif. (KFSN) -- For the first time since the July 2017 robbery at a Northwest Fresno Starbucks, the Good Samaritan who took down the suspect is telling his story publicly.

Police have honored Cregg Jerri as a hero for foiling the robbery attempt. But the man he stopped is still fighting him, and claiming he was the one who needed a hero.

When the masked man walked into Starbucks and pointed a gun at the cashier, Jerri says he got up to leave. He barely moved before he changed his mind.

His "something" involved grabbing a chair, walking up to Ryan Flores, and bashing him with it.

Jerri says he wanted to knock the guy down and disarm him. It did not quite work.

Flores lost his gun, which turned out to be a fake and his mask, but not his footing. And he still had a knife.

The two men brawled and Jerri says he was scared it wouldn't end well.

We are not allowed to show Jerri's face during his testimony at trial, but he says Flores stabbed him in the neck.

He showed jurors a wound more than an inch long and requiring six staples.

Jerri, he says he eventually got the knife and stabbed Flores a couple times before pushing him towards the exit.

Defense attorney Richard Esquivel asked him why the store's video doesn't show him bleeding. He questioned whether Jerri kept fighting when he could have stopped.

"You're on top of him, correct?" Esquivel asked, referring to a section of the store's video near the end of the fight.

"He's face down at this point?" Esquivel asked.

"What's preventing you from backing away?" Esquivel questioned him.

Police interviewed Flores while he was in the hospital getting treatment for his stab wounds.

He told them, at the time, he did not even remember having a knife.