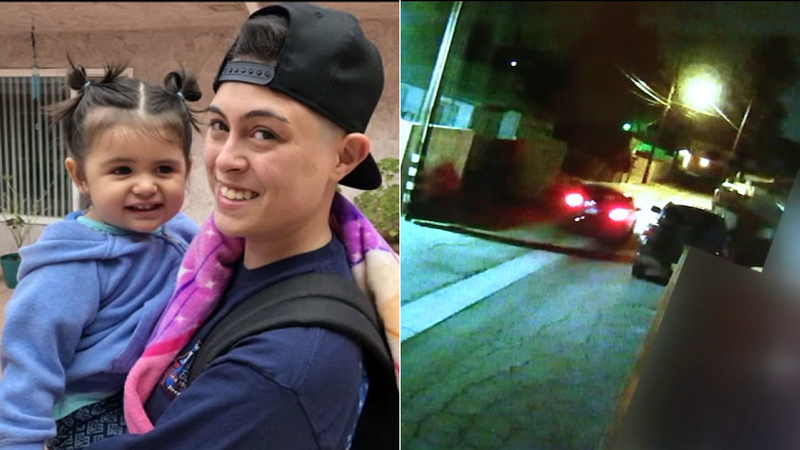 Family desperate for answers in killing of Granada Hills woman

GRANADA HILLS, LOS ANGELES -- A Granada Hills family is desperate for answers after a 24-year-old woman was gunned down outside her home, and as surveillance video from the shooting offers new details on the case.

Cheyenne Brown, the mother of a young girl, was shot in the alley behind her house as she returned home from work.

Surveillance video shows the suspected shooter lying in wait in a pickup truck in an alleyway and apparently ambushing Brown as she returned home. The gunman opened fire as she was getting out of her car.

"I can't imagine it being random because it happened as soon as she got in," said Brown's grandfather, Bill Schroeder.

In the surveillance video, Brown is seen driving by the pickup waiting in the alley behind her home. Seconds later, the truck pulls up next to her car.

Video shows a shadowy figure get out, walk up to the 24-year-old and open fire.

Family members say they heard three gunshots. The pickup then slowly pulled away after the shooting.

"I ran out and tried to do CPR," Schroeder said. "When paramedics came they said she was already gone."

It is unclear from the video how many people were in the truck and who opened fire.

Police aren't releasing much information about about the case.

Her family can't imagine the motive behind the killing, saying she had no enemies that they know of.

"We're in a state of denial right now," Schroeder said. "I keep waiting to get pinched to wake up."

The shooting happened on Chatsworth Street just before 10:30 p.m. Monday.

The 24-year-old mother and competitive figure roller skater had just returned home from work and was getting things out of her car when she was ambushed.

Her backpack was still on the passenger side of her car. It appeared someone came up and shot her from behind.

"Her backpack was laying there, too, so apparently she was just reaching over on the passenger side, getting everything and somebody came up and shot her from behind," Schroeder said.

Family members say Brown has no enemies. They say even her toughest competitors on the rink are her friends. She's been skating since she was 7, winning numerous trophies and medals.

Her young daughter, just about to turn 2 years old, was her pride and joy.

While Brown was in the midst of a divorce with her wife, her family says they can't imagine she is responsible.

At this point police say they have no suspect information and are reviewing surveillance video from the alley for clues.

Brown's family says all they want is justice.

"I just hope whoever did it is caught, and put away or at least taken off the streets so they can't do it again," Schroeder said.