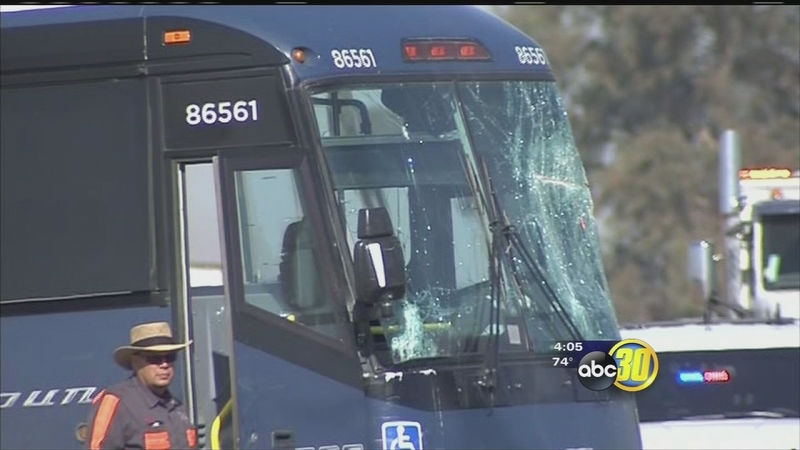 TRAVER, Calif. (KFSN) -- In Tulare County several people were injured in a Greyhound bus crash. The bus veered off southbound Highway 99 near Traver Wednesday morning. The bus smashed through fences and clipped a cotton bin before coming to a rest in a field.

There were 30 to 35 passengers on the bus and, according to the CHP, 14 people were taken to the hospital with minor injuries.

Mario Flores said he was asleep inside this Greyhound bus when it drifted off of Highway 99.

At that point Flores said he grabbed a rail and held on tight through the chaos.

"Everybody was flying around, saw a couple people out of their seats in the middle of the aisle and everything."

Two barbed wire fences, a small hill, and a big cotton bin weren't enough to stop the bus. It pushed through and ended up in a field on the side of a frontage road near Traver, just north of Avenue 328.

Victoria Casillas said the initial impact also woke her up and a seatbelt saved her life.

Casillas escaped with back pain while others were taken to hospitals in Tulare, Visalia, and Hanford. CHP officer Steve Beal said the injuries were all minor cuts and bruises and the bus driver took the hardest hits.

"He had the most visible injuries-- he had a couple lacerations, maybe an abrasion on the back of his head. But he was coherent, walking, talking, very cooperative."

Officer Beal said there were no signs of drugs or alcohol. He said, the bus was on a journey from Oregon to Los Angeles and it made a stop in Sacramento, Wednesday morning. The drivers were switched out and roughly five hours into this leg of the ride is when it crashed.

Passengers said the driver was eating and had some kind of medical issue.

"People in the front knew what happened, they said the bus driver coughed and passed out," sid Louisa Moritz, passenger.

Those who were able to walk away were stranded for a few hours. Greyhound sent a second bus to the scene to pick them up.

Looking back on the crash, Flores said he's surprised this many people were able to walk away.