'I told myself I wasn't gonna get addicted': Fresno teen talks about how he started vaping 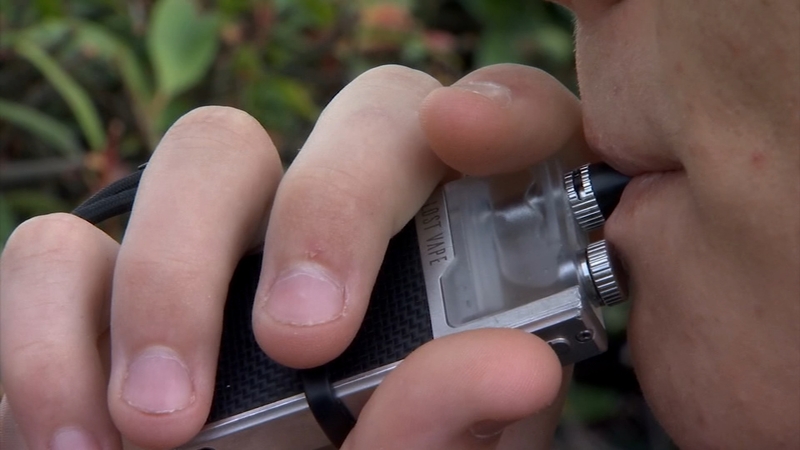 Fresno teen talks about how he started vaping

FRESNO, Calif. (KFSN) -- It's similar to the high he gets while riding his skateboard.

At 17 years old and a senior in high school, one Fresno teen we're calling Logan got his first nicotine buzz from a vape pen three years ago.

"I told myself I wasn't gonna get addicted and I tried to quit like a couple times and then I just kinda gave up," says 'Logan'.

'Logan' doesn't want to reveal his identity, but he says he's one of thousands of local teens with a discreet habit that's easy to hide.

He's even managed to get away with doing it in class before, but says the most popular place is the restroom.

"Everybody is doing it like at break. Everybody. They are just in there vaping. You can hear it," he says.

At first, the fruity flavors drew Logan's interest. But then once his friends tried it and he realized how easy it was to get, he was sold.

Why not a cigarette, we asked him.

"Vaping it tastes better and it gets you, there's higher nicotine levels. It can go up as high as you want and at first everybody thought it was safer," he says.

With vaping, Logan says there's no bad ashtray smell that lingers. All that's noticeable is a light perfume scent.

The smoke can vary depending on the desired effect. Some like to do tricks while others work hard to keep it concealed.

"The smoke is dense at first but you can hold it in your lungs and then it just dissipates. You can blow out no smoke," he says.

Last year district leaders discovered many of the cases of teens getting into trouble on campus were vaping-related.

"The SRC's student responsibility centers and learning directors were confiscating a lot of different type of paraphernalia that we really hadn't seen before," says Anderson.

As part of a pilot program, Clovis Unified is installing vape detectors over winter break in both intermediate and high schools- to monitor areas prone to vaping.

"And they'll really help us hopefully as a prevention and preventative as well so students don't feel like they are just getting away with it... Because I think technology is catching up and we're glad that it is," says Anderson.

Based on Logan's own experiences, he believes many his age who vape eventually graduate to using stronger pods, including those with marijuana derivatives.