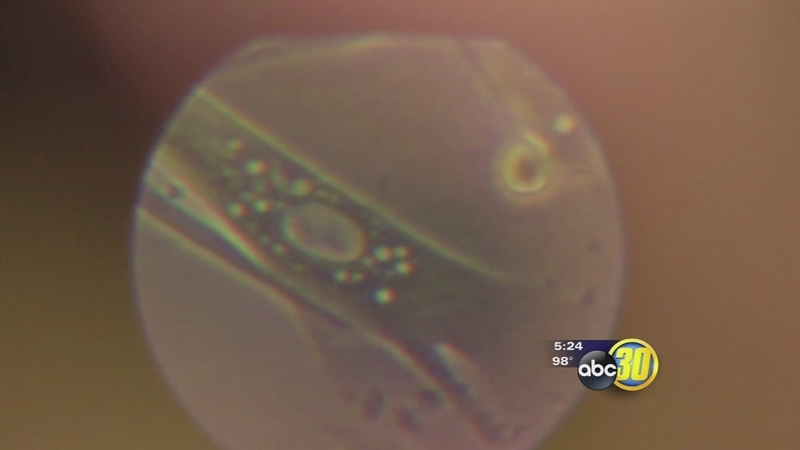 FRESNO, Calif. (KFSN) -- Hemorrhagic stroke is responsible for more than 30 percent of all stroke deaths. It happens when a weakened blood vessel ruptures and bleeds into the brain.

It's something Jon Galvan experienced five years ago after he almost died from a hemorrhagic stroke while atSubmit work.

"I was typing away and I felt a pop in my head," Galvan told Ivanhoe.

He was able to recover, but Abba Zubair, MD, PhD, Medical Director of Transfusion Medicine and Stem Cell Therapy at Mayo Clinic, Florida says not everyone is as fortunate.

"If it happens, you either recover completely or die," Dr. Zubair told Ivanhoe. "That's what killed my mother."

"Based on our experience with bone marrow transplant you need about 200 to 500 million cells," Dr. Zubair said.

But conventionally grown stem cells take a month. Experiments on earth have shown that stem cells will grow faster in less gravity.

"Five to ten times faster, but it could be more," Dr. Zubair said.

Specifically he hopes to expand the number of stem cells that will help regeneration of neurons and blood vessels in hemorrhagic stroke patients.

"I think this will revolutionize how we treat stroke patients, not only hemorrhagic but even the ischemic stroke,Submit which is much more common," he said.

The stem cells will be taken to the international space station within a year. While one batch of cells is grown in space, another batch will be grown on earth; other than the appearance of gravity the growing environments will be the same. Dr. Zubair says if the lack of gravity proves to be a better environment for stem cell growth, then the next step will be to transform the cells into tissue, and ultimately organs. He envisions a future where replacement organs can be grown in space as well.

BACKGROUND: A brain hemorrhage is a stroke that is caused by an artery in the brain that bursts which causes bleeding in tissues around the brain. The effects on the brain lead to damaged brain cells. Brain hemorrhages make up 13 percent of strokes and can easily take the lives of affected patients. A cerebral edema occurs when blood from a trauma accident irritates brain tissues. This affects the tissue and reduces blood flow in the brain. (Source: http://www.webmd.com/brain/brain-hemorrhage-bleeding-causes-symptoms-treatments)

SYMPTOMS: Common symptoms of a brain hemorrhage depend on the location of the bleeding in the brain. Emergency attention needs to be brought to a doctor if any of these symptoms exist:

NEW TECHNOLOGY: There are currently no treatment options available to doctors or patients which can help regenerate the brain tissue damage caused by stroke. However, doctors at the Cleveland Clinic are looking at a way to use stem cells to solve the problem. But first they have to be able to grow enough stem cells quickly enough for such treatment to be viable. They're currently planning to send stem cells to the International Space Station to have them grow in the microgravity environment in space. Experiments on earth have shown they may grow up to five or ten times faster in microgravity. This would allow massive numbers of stem cells needed for such treatments, between 200 and 500 million, to be grown much quicker than on earth. (Source: Dr. Abba Zubair, Mayo Clinic) MORE.

What kind of research are you doing here?

Dr. Zubair: Well we have a lot of exciting research going on. Specifically the one I'm part of is the opportunity to grow stem cells at the International Space Station and at microgravity conditions. Why are we interested in that with a growing number of applications for stem cells in research medicine, the demand for having enough stem cells is growing. So one of the challenges is to grow enough cells for a patient that needs a transplant. Naturally stem cells they are not supposed to grow more than they should and their number is well controlled. Because there are stem cells in every organ, if you have too many seeds then you will have overgrowth. The body naturally controls the number so it is hard to get them out. Stem cells are almost everywhere and currently we're getting them from bone marrow; only five percent of the cells are actually stem cells. So to have them in the number needed for a transplant is a challenge. We're finding ways to grow them quicker so that when they are needed they can be available readily. Currently to grow enough cells for a few patients, it takes up to a month. Obviously everything we do from cell division to organ developing is impacted by gravity. So some previous studies show if you take out the gravity, meaning really that you reduce the presence of gravity, actually a stem cell can grow a little bit faster. We want to harness that opportunity and go to the International Space Station and see whether we can expand the cells.

Without gravity how much faster can they grow?

Dr. Zubair: We think we can get maybe five to ten times faster, but it could be more. Again nobody has done it and simulated gravity that is done in the lab is not always the same as the true gravity out there. So we hope it would even grow even faster. And again it depends also on the nature of the cells. There are different types of stem cells. So I would say I'm hoping for five to ten times more but maybe even more so that we can quickly grow them and have them now for clinical use.

You all are doing this to treat stroke patients?

Dr. Zubair: Yeah, so the intent specifically for this study that I am doing is for hemorrhagic stroke. There are several types of stroke but many can be divided into two: ischemic stroke, where it is due to a piece of clot that goes to the brain and causes lack of blood supply in an area, or it can be hemorrhagic, which is usually associated with blood pressure issues. But it can also cause bleeding in the head, where blood shouldn't be. I have a personal experience with this, because hemorrhagic stroke is what killed my mother. So basically it's one of my motivations and that's why really I'm interested. I'm not a neurologist, but because of that I don't want anybody to lose their mother because of hemorrhagic stroke. With hemorrhagic stroke it is very devastating; if it happens you either come back completely or die. The mortality is very high and currently there are no options at all for hemorrhagic stroke other than controlling blood pressure and controlling inflammation that the blood causes in the brain. But there is no treatment to really address regeneration of the damaged tissue.

What exactly do you think taking away the gravity will do?

Dr. Zubair: Gravity is everywhere, right? But if you go away from the earth or in a freefall it goes away. When cells divide during the process of the cell division, even the chromosomes segregate and the segregation creates polarization of the chromosomes before the cells divide and that is also influenced by gravity. How organs develop, the shape of the organ also is influenced by gravity. So the gravity definitely has an impact on us.

How big of a breakthrough do you think this is for stroke patients?

Dr. Zubair: I think this is going to be huge, because this is a condition that is very fatal. If you survive it, yeah, that's great, but a lot of people don't. So I think this will revolutionize how we treat stroke patients, not only hemorrhagic but even ischemic stroke which is much more common..

Are you worried that if you grow these stem cells in space and bring them back down to earth, that it will impact them because they're coming back down to gravity?

Dr. Zubair: Yes. So the safety concerns are at the center of this project that we're doing in space. One of the things that we are worried about is as cells grow faster there is a tendency to be malignant. Actually that's one of the concerns when you are culturing cells over time they may accumulate damage to the DNA and may become more like cancer. So what we are worried about is that the cells that we grow at the International Space Station, when they come back to us, will they behave the same way as the cells grown here or would they be transforming and become cancerous? We have experiments that we will perform to ensure that this doesn't happen and that's why this project is just the first step. We want to see first how the cells are growing there and when they come back are they safe, do they transform; these things have to be established first before we go into patients.

Why couldn't you just take this to the space coast and go into the antigravity lab and grow them there?

This information is intended for additional research purposes only. It is not to be used as a prescription or advice from Ivanhoe Broadcast News, Inc. or any medical professional interviewed. Ivanhoe Broadcast News, Inc. assumes no responsibility for the depth or accuracy of physician statements. Procedures or medicines apply to different people and medical factors; always consult your physician on medical matters.