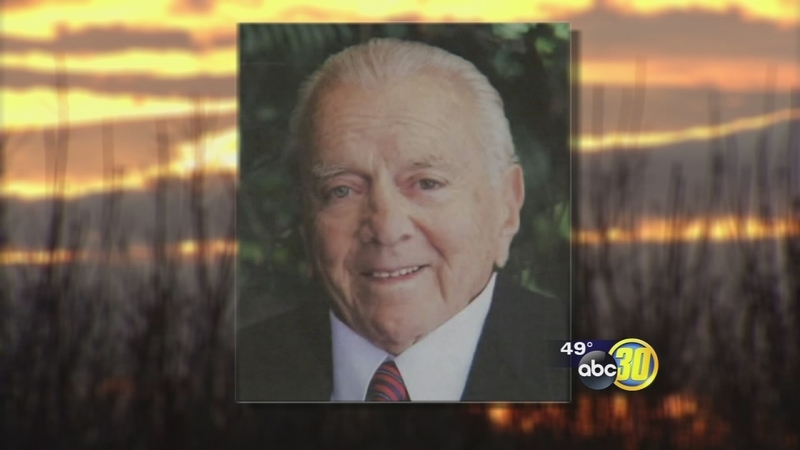 FRESNO, Calif. (KFSN) -- Days after his death, family members of a Valley farmer are renewing his fight against the controversial High-Speed Rail project.

With his family by his side, Harold Parichan died last Wednesday night at St. Agnes Hospital in Fresno. In his 92 years on earth, he was constantly proving people wrong. At three years old, polio took away his ability to walk.

But he got mad when anyone said he was handicapped.

He went to Berkeley, Harvard, and then Stanford, which lead him to a successful career as a product liability attorney. He planted new roots in Madera County as an almond farmer in the early 1960's, inspired by his wife's family's farm in nearby San Joaquin. "Almost to the day he died he was still farming, he would still go out there, he signed the paychecks, he did everything, he was out there," said Sue Habild, Parichan's daughter. "He puts his whole heart and soul into everything, whatever he did, didn't matter."

He was a driven, successful almond farmer for years, and nothing stood in his way until blueprints of California's controversial High-Speed Rail project emerged at community meetings. "Well I went and here's this large map and there's dad's land and the railroad tracks are going right through it," Habild said. The threat of a train cutting through Parichan's land depressed him, but it didn't stop him from fighting back.

His daughter says he was constantly going back and forth with the state. "His whole life was consumed at the end with the High-Speed Rail," she said. "Everything."

Now that he's gone, nothing has been resolved.

And family says there's talk of the state exercising eminent domain and buying parcels of land that are in the train's way. But they say they'll do anything for Parichan, and that's why they say they'll continue the fight against High-Speed Rail. "Sometimes there isn't a value that you can put on things and his land is one of them," Habild said.