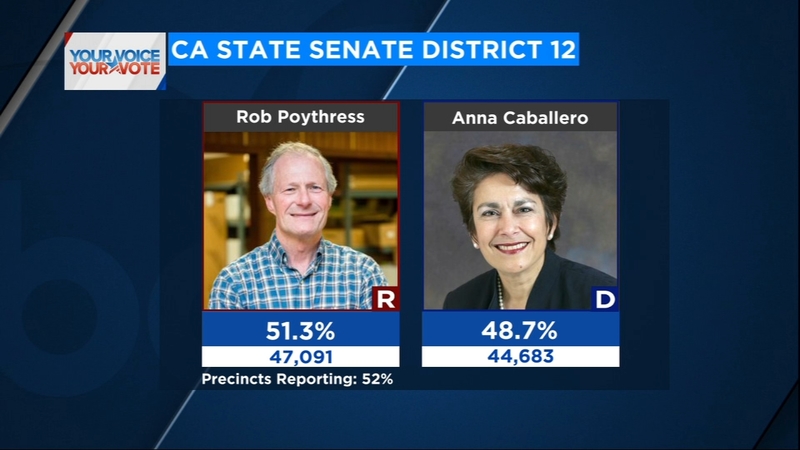 Democrats' total dominance of the state Legislature likely comes down to a single state Senate seat in Tuesday's election.

Democrats need 27 seats for a two-thirds majority in the 40-member Senate and had 26 heading into the election. The party is also working to defend its supermajority in the Assembly.

That would be a benefit to Democrat Gavin Newsom, who polls showed leading in the governor's race. If Republican John Cox wins, it could frustrate his efforts.

All 80 California state Assembly seats and half the Senate seats are up for election. But as a practical matter, only a few could swing between the two major political parties as Democrats fan a backlash to President Donald Trump and Republicans rally opposition to last year's gas and vehicle tax hikes that annually raise $5 billion to support transportation improvements.

Though Cannella held Senate District 12 for eight years, Democrats are at an 18-point advantage in voter registration.
Caballero, a former Salinas mayor, has better name recognition than Poythress in a district that includes all or parts of Fresno, Madera, Merced, Monterey, San Benito, and Stanislaus counties.

But she lost to Cannella in 2010 in the mostly rural farming district, and Republicans are emphasizing her support last year for higher gas and car fees.

Democrats are considered likely to retain their two-thirds supermajority in the 80-member Assembly, where they need 54 votes and have had 55. Republicans already gave up another vote when voters picked two Democrats to face off for the seat vacated by incumbent GOP Assemblyman Rocky Chavez.

The parties are fighting what Assembly Republicans political director George Andrews called a "money war" over Cervantes' seat, as well as trying to capitalize on weak primary election support for Democratic Assemblyman Rudy Salas of Bakersfield.