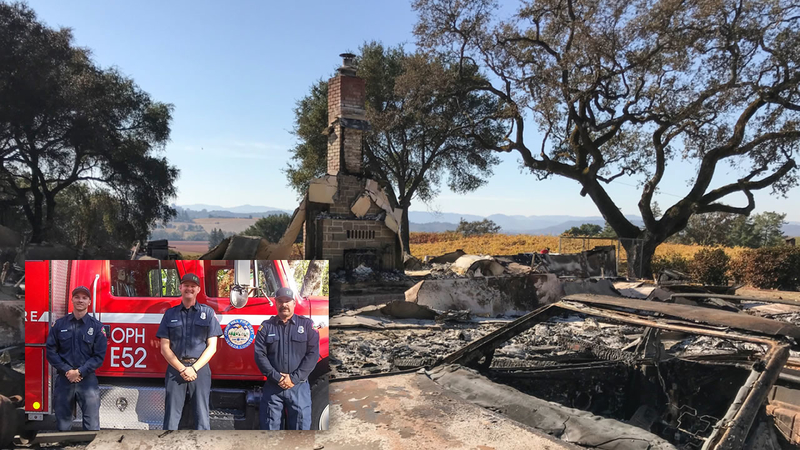 SONOMA COUNTY, Calif. -- With every burned house in the Kincade Fire, there's a story of what is, what was, and how it came to ashes.

There is what used to be a dream home in the vineyards off Highway 128 where Jeff Thomsen spent the last 35 years of his life.

"I felt stupid for not grabbing stuff but I thought I would be back," he told us.

It didn't work out that way. The home succumbed to flames driven by high winds. And yet, out of that came Jeff Thomsen's small miracle.

When firemen arrived, the house was already fully involved. There would be no saving it. But when they looked inside, firefighters noticed pictures on the wall and personal items.

They gave themselves three minutes to save what they could.

"We just did it," said Captain Jon Nelson from the Ophir Hill Fire Department near Grass Valley. Along with firefighters Andrew Fike and Brian Harms, they took the calculated risk.

"I thought of it as my house," said Captain Nelson. "We would want the pictures on the walls."

They saved other keepsakes as well, including a 200-year-old Bible from the old country.

Before leaving, they left what they saved in a pump house on the property.

Jeff Thomsen picked them up a couple of days later, and now has them in the back seat of his pick-up truck.

"It was just above and beyond," he said.

RELATED: How to help Californians impacted by the Kincade Fire

Not just that they saved so much, but also that they took items as if guided by unseen forces.

"This is the box on the shelf," said Jeff. "And they grabbed it."

The box contains recipes that belonged to his wife, Laurie. She passed away ten years ago.

"Like my son said, it's just stuff but this is important," said Jeff. That's when words failed him .

So said the man who thought his memories had turned to ashes, like so much else.

Jeff Thomsen thought he lost everything in the #KincadeFire. But, as his house burned, he learned that fire fighters from @OphirHillFire took 3 minutes to save personal items, even his deceased wife's recipes. "It's just stuff, but important." Then the words failed him. #abc7now pic.twitter.com/z3hWVXr6db