Students were given a scheduled time slot and they went from station to station taking pictures, playing games and even dancing.
KFSN 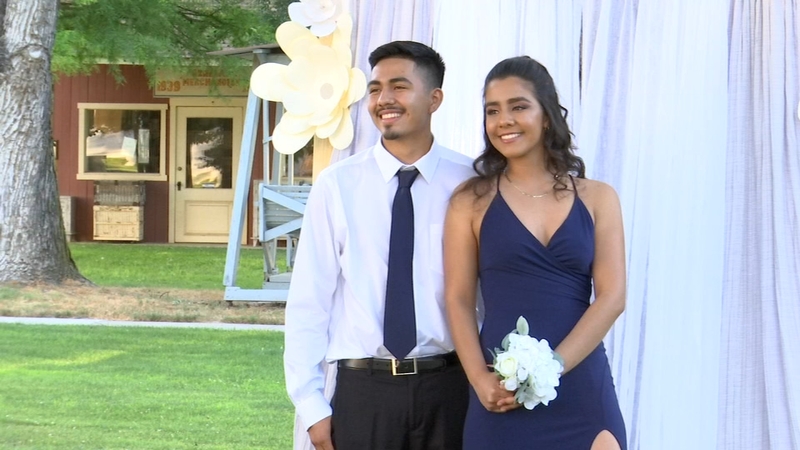 KINGSBURG, Calif. (KFSN) -- It wasn't the prom Kingsburg High School's class of 2020 dreamed of, but they say it's the one they needed.

The pandemic has forced schools across the country to shut down and to cancel many monumental events.

But a Kingsburg group didn't let that stop them from giving high school seniors their prom.

That prom took place on Thursday at the Kingsburg Historic Park and it was not put on by the school, but instead community members.

Every student was looking forward to something different.

"Getting to see everyone again," said Bianca Valenzuela.

Students were given a scheduled time slot and they went from station to station taking pictures, playing games and even dancing.

"It is just a last hoorah to feel like a high school event to some extent," said senior Adam Bratton.

The park may not be the venue Kingsburg High School students ever envisioned for their prom, but given the circumstances, it was perfect.

"Obviously nothing is going to compare, but to get that sort of feeling that this is a school event where we should be at right now, I think that would mean the world to the seniors," said Adam Bratton.

Adam Bratton and his graduating peers attended a different kind of prom - one put on by the community and donors.

Adam's mom Joy was the driving force behind the event taking place at Kingsburg Historic Park.

She felt the need to give students a proper send-off.

"These seniors have had so much taken from them and so I thought what could we do to fill in any of those voids," said Joy Bratton.

She reached out to the city and health officials about planning the prom and she was given the green light.

"I had a lot of parents immediately reach out when I put it on Facebook saying, 'What can I do to help?'" she said. "They helped make tissue flowers, they helped set up today."

Instead of a party-style event with a large dance floor, students came into the park two at a time during different time slots.

They went from station to station where they took pictures, played games and made lasting memories.

At the end, students received a meal provided by a local restaurant they could take home or eat at the park.

Just like a normal prom, students needed to buy tickets, but Joy said many of them were sponsored by community members.

She said she hopes seniors can learn a lesson or two from the prom.

"I just hope that they learn that even when the world gives you a not-good deck of cards, that you can still make something good out of it," she said.