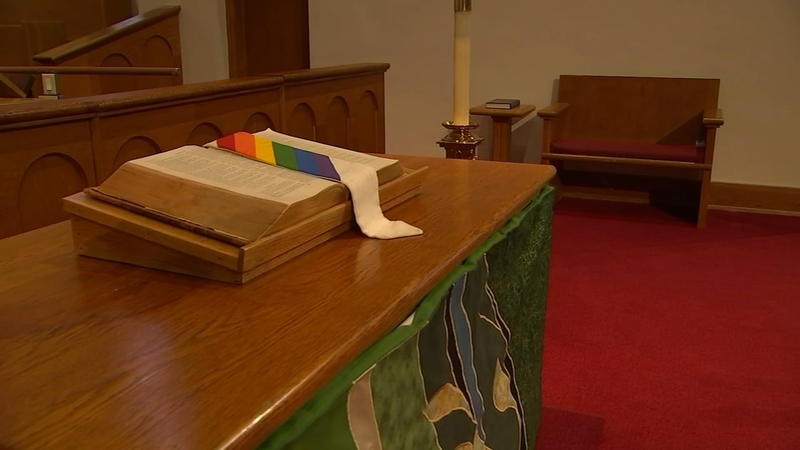 This Raleigh church has been supporting gay rights since the 1950s

RALEIGH -- Founded in the late 1800s, Pullen Memorial Baptist is one of the first churches in Raleigh, North Carolina to embrace LGBT rights.

Nancy Petty is a symbol of his legacy.

In 2002, after a decade of serving in ministerial and associate leadership roles, Petty became the first woman and lesbian pastor to lead this 500-member, historic church.

"It was a real moment of blessing, of affirmation and at the same time it was almost surreal. Like, is this really happening?" said Pastor Petty.

It was a progressive decision -- years in the making.

In the early 90s, same sex couple Kevin Turner and Steven Churchill -- both members -- asked the church to bless their committed union.

"I believe it was one of the best decisions we ever made," said Steve Smith, a member of Pullen since the 1970s.

Smith says some 90 percent of members voted to be more inclusive and two-thirds voted to approve same-sex blessings.

The fallout was astounding. It was during the height of the AIDS epidemic, where the larger society demonized and stereotyped gays.

"We were picketed. We were kicked out of the local, state and national Baptist associations," said Smith. "Kicking a congregation out for a faith decision is about as un-Baptist as anything you can do. We gained new members. Gays, lesbians and people like my wife and me who wanted their families to grow up in a community like this."

That's what led Dave Parnell and Jeff Evans to Pullen in the mid-90s.

Parnell read an op-ed in the N&O from Pastor Siler that was welcoming and affirming.

In February 2004, the couple celebrated their holy union here at the church.

"It was just the biggest blessing that we ever could have imagined," said Parnell.

"It's hard or difficult for us to talk about without getting choked up because we just didn't think it would ever happen," Evans added. "The horror. The terror. The hurt that we went through for 20 years or more is what the younger ones don't know. People called us perverts."

Fast forward to present day. Standing from a church pulpit this summer, North Carolina's first Black Lieutenant Governor Mark Robinson receiving praise and national backlash, including from the White House, for his stance on LGBT books in public schools.

"There's no reason anybody anywhere in America should be telling any child about transgenderism, homosexuality any of that filth. And yes, I called it filth," he said.

"Our transgender siblings, our young people are out there and right now they need our voice as strongly as I needed, and Jeff and Dave needed 30 years ago," said Petty. "The work continues and we have to be about that work."

Reference material coordinated in conjunction with local LGBTQ+ archives and the ONE Archives Foundation.

The ONE Archives Foundation is the independent community partner that supports ONE National Gay & Lesbian Archives at the University of Southern California (USC) Libraries, the largest repository of Lesbian, Gay, Bisexual, Transgender, Queer (LGBTQ) materials in the world. Founded in 1952 as ONE Inc., the publisher of ONE Magazine, ONE Archives Foundation is the oldest active LGBTQ organization in the United States. In 2010, ONE Archives Foundation deposited its vast collection of LGBTQ historical materials with the USC Libraries. Today, the organization is dedicated to promoting this important resource through diverse activities including educational initiatives, fundraising, and range of public programs.