Action News Investigation: How many students have measles vaccination at your child's school? 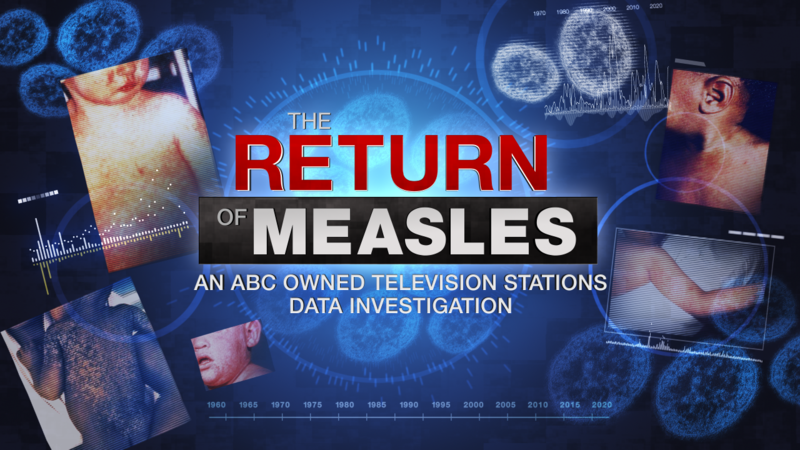 Action News Investigation: How many students have measles vaccination at your child's school?

FRESNO, Calif. (KFSN) -- Measles is one of the most contagious viral infections known to man.

The measles virus can live up to two hours in an airspace where an infected person coughed or sneezed.

Like the common cold, there is no sure-fire cure, which is why Dr. Mhaissen stresses the importance of preventative measures like the MMR (measles, mumps, and rubella) vaccine.

"Prior to the widespread use of the measles vaccine, four to five million people would get the measles infection every year," said Dr. Mhaissen.

After the creation of the vaccine in 1963, measles cases became a rarity.

The World Health Organization says 93 to 95 percent of a population group needs to be vaccinated for herd immunity to work.

Of Central California's 425 reporting elementary schools, only 11 fall below the 93 percent range.

Since 2016, California has had some of the nation's tightest immunization laws. Schools no longer accept exemptions for personal or religious reasons. However, doctors are allowed doctors to excuse children, either temporarily or permanently, from some or all vaccinations if there is a medical reason.

"(The measles) mostly affects people who are not vaccinated," said Dr. Mhaissen. "The vaccine does work. It is not the only measure to prevent, but it is one of the most important measures."

With the vaccination debate intensifying across California, Dr. Mhaissen strongly urges parents to get informed and speak with their doctors, face-to-face about their concerns.

"I understand some of the concerns people have," said Dr. Mhaissen. "Association is not causation. If two events happen at the same time, it does not mean one led to another."

Within an hour of posting a call on Facebook for parents to speak about their experiences with vaccines, responses came flooding in. Despite differences of opinion, there was one common theme amongst parents: they all wanted their kids to be healthy.

We spoke to Laura Edwards, a mother of three who is discontinuing vaccines for her children. Her 8 and 9-year-olds are fully vaccinated, but she says her youngest, Annabelle, had a scare after her two-month vaccinations.

"My heart just dropped, I was changing her diaper, and red welts just started appearing all over her body," said Edwards.

Anabelle was given a permanent medical exemption (PME) for all vaccines, something that may be in jeopardy with the states newest law on PME's.

"I will not vaccinate her again until safety studies are done, and vaccines are safe for her to have," said Edwards. "One size does not fit all children, and they don't fit my daughter."

That's why Denika Brenner is discussing a delayed vaccination schedule, with her daughter's pediatrician after her son Miles had an adverse reaction to the MMR vaccine.

"By 7 o'clock that night he was throwing up everywhere," said Brenner.

That continued for three days, followed by two weeks of flu-like symptoms.

Even with the reaction, Brenner says she doesn't regret the decision, "I would rather see my son get a little cold than die from a disease that I could prevent."

But she wishes she would've consulted the doctor about her medical history, "Knowing your family medical history should play into whether you decide to do a preventative measure."

A sentiment Ashley and Spencer Koehn share, but that is why they have chosen to get their kids vaccinated.

"I'm deathly afraid for my oldest, even though she's been vaccinated, for all the other kids that might not be vaccinated in her school," said Ashley Koehn.

The couple's youngest child, Emily, just turned one and is about to get the MMR vaccine, something that's coming as a relief.

"It's kinda consumed me a little bit because I know they can die from it," said Ashley.

Spencer's father and uncle both had the measles as children, before the vaccine came out and his aunt was born deaf after contracting the measles in the womb.