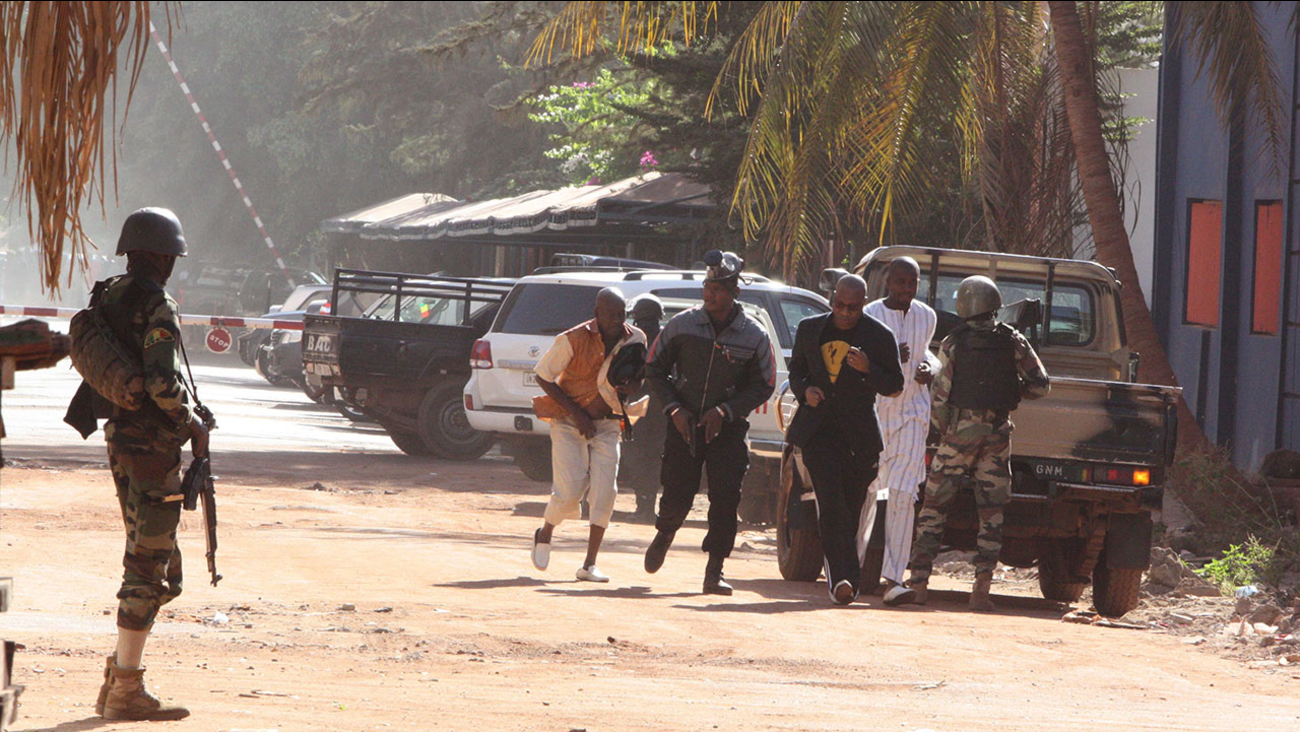 BAMAKO, Mali -- Heavily armed Islamic extremists seized dozens of hostages Friday at a Radisson hotel, but Malian troops, backed by U.S. and French special forces, swarmed in to retake the building and free many of the terrified captives. At least 20 people, including one American, were killed along with two gunmen during the more than seven-hour siege, a Malian military commander said.

An extremist group led by former al-Qaida commander Moktar Belmoktar claimed responsibility for the attack in the former French colony, and many in France saw it as a new assault on their country's interests a week after the Paris attacks.

While French President Francois Hollande did not link the violence at the Radisson Blu hotel with last week's bloodshed in Paris, he declared that France would stand by the West African country.

"Once again, terrorists want to make their barbaric presence felt everywhere, where they can kill, where they can massacre. So we should once again show our solidarity with our ally, Mali," he said.

President Barack Obama called the attack a reminder of the "scourge of terrorism" and said its barbaric nature only "stiffens our resolve to meet this challenge."

Gunfire continued throughout the day at the hotel, which is popular with airline crews and other foreigners doing business in the capital of Bamako, but the shooting had stopped after dark.

Officials would not confirm that the entire complex had been secured by nightfall, although the only activity was firefighters carrying bodies to waiting ambulances.

Malian state television said late Friday night that the government had announced a 10-day state of emergency beginning at midnight as well as a three-day period of national mourning beginning Monday.

Army Cmdr. Modibo Nama Traore said late Friday that 20 people had been killed, including an official with Mali's gendarmerie. In addition, he said five people were injured including two police officers.

The U.S. State Department said one American was among the dead. Her family identified her as Anita Datar of Takoma Park, Md. Datar's LinkedIn profile said she worked for international development agency Palladium International Development.

"We are devastated that Anita is gone," the family said in a statement. "It's unbelievable to us that she has been killed in this senseless act of violence and terrorism."

Though Traore had earlier said as many as 10 attackers were involved, he said Friday night that there may have been only two gunmen, both of whom were killed. A police officer at the hotel displayed photos of the two dead gunmen, their bodies riddled with bullets.

The siege began when assailants shouting "God is great!" in Arabic burst into the complex and opened fire on the hotel guards, Traore said earlier on Friday. An employee who identified himself as Tamba Diarra said by phone amid the attack that the militants used grenades.

About 170 guests and employees were initially taken hostage, but some apparently escaped or hid in the sprawling, cream-and-pink hotel that has 190 rooms and a spa, outdoor pool and ballroom. They included visitors from France, Belgium, Germany, China, India, Canada, Ivory Coast and Turkey.

"It was more like a real terrorist attack," said U.N. Mission spokesman Olivier Salgado. "The intention was clearly to kill, not to necessarily have people being hostage."

Traore said 126 people had been escorted to safety, and that at least one guest reported the attackers instructed him to recite verses from the Quran as proof of his Muslim faith before he was allowed to leave.

As people ran for their lives along a dirt road, troops in full combat gear pointed the way to safety, sometimes escorting them with a protective arm around the shoulder. Local TV showed heavily armed troops in what appeared to be a lobby.

Monique Kouame Affoue Ekonde of Ivory Coast said she and six other people, including a Turkish woman, were escorted out by security forces as the gunmen rushed toward the fifth or sixth floor. Ekonde said she had been "in a state of shock."

U.S. special forces assisted, said Col. Mark Cheadle of the U.S. Army's Africa Command. At least six Americans were evacuated from the hotel, Cheadle said. U.S. officials were trying to verify the location of all American citizens in Mali.

National Security Council spokesman Ned Price praised the bravery of the Malian, French, U.N. and U.S. security personnel who responded, adding that Washington was prepared to assist Mali's government as it investigates "this tragic terrorist attack."

The U.N. mission sent security reinforcements and medical aid to the scene, said U.N. deputy spokesman Farhan Haq. A few U.N. staff were in the hotel but they got out safely, he added.

Reflecting the chaos surrounding the siege, various death tolls were reported during the day. French Foreign Minister Jean-Yves Le Drian said 19 people died - 18 in the hotel and one Malian soldier killed in the fighting.

A U.N. official had earlier said initial reports put the number of dead at 27, but that different casualty figures have been reported and the organization is working with authorities to get an exact total. The official spoke on condition of anonymity because the operation was still ongoing.

Throughout the siege, officials in various countries from Europe to Asia sought to find out whether their citizens staying at the hotel were safe.

Chinese state broadcaster CCTV, citing its diplomats in Mali, reported about 10 Chinese citizens took shelter in their rooms, and all were safe.

Also reported safe were 12 members of an Air France flight crew and five from Turkish Airlines. All 20 guests from India were evacuated as well, said Vikas Swarup, spokesman for India's Foreign Ministry.

The attack was perceived by many in France, particularly in the government, as a new attack on its interests.

An extremist group that two years ago split from al-Qaida's North Africa branch and led by Moktar Belmoktar claimed responsibility in a recorded statement carried by Al-Jazeera. The group said it wanted fighters freed from Mali's prisons and a halt on attacks against northern Malians.

The group, known as the Mourabitounes, was formed in 2013 after Belmoktar left al-Qaida in the Islamic Maghreb and joined with a Malian militant group. The statement said the Mourabitounes had attacked in coordination with the "Sahara Emirate" affiliated with al-Qaida.

The French military operation in Mali in 2013 against Islamic extremists who were holding the northern half of the country was the first of several foreign interventions that Hollande launched as president. Those interventions have prompted increased threats against France and its interests from extremist groups ranging from al-Qaida's North African arm to the Islamic State group.

Dwayne 'The Rock' Johnson announces he is backing Joe Biden