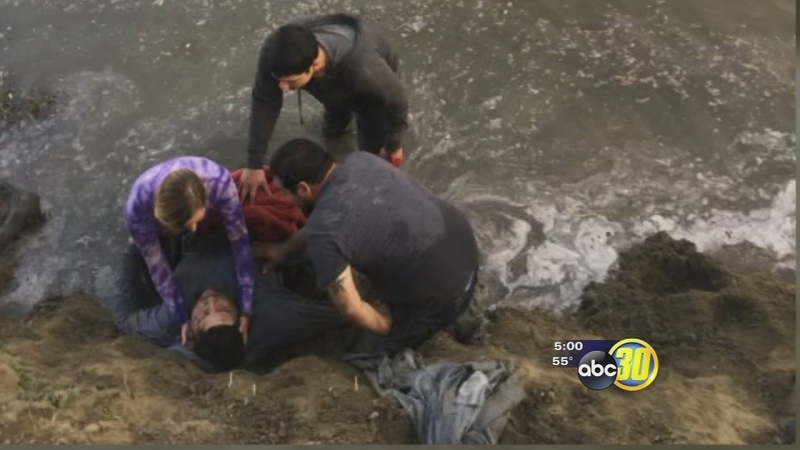 LEMOORE, Calif. (KFSN) -- Thousands of cars cruise past Highway 41 every day, but few journeys are as life changing as Emily Elmerick and Sydney Antles' trip.

"As I was sprinting, I was just thinking this was one of the moments that I was created for," said Antles.

The two college roommates were driving from Santa Barbara up to Fresno to visit a friend. They were a few miles south of Lemoore when they spotted a car drifting in their rear view mirror.

Elmerick said, "I started watching them, they over corrected and started wobbling. The moment I said oh my gosh, I knew they were going over the other side."

CHP officers said a truck crossed multiple lanes of traffic and overturned into a canal. Three men were trapped inside-- it's a feeling Antles knows all too well.

"I had been in a car crash myself and so the moment I saw it, I just remembered the people who helped me."

A truck crushed Antles in a T-bone accident back in 2015. Doctors predicted she wouldn't survive, when she did, there was one thought on her mind.

"It was in that moment I decided to become a lifeguard. Because it was the smallest thing I could do to be able to reach out to other people,

On Monday-- as other rescuers helped bust open the windows and flip the truck. Antles was on the ground prepared to give CPR to an unconscious driver.

"The thought that we could reach out to someone and do the exact same thing someone did to me."

Antles actions not only paid back past kindness, but also passed onto someone else a new chance at life.

"The first thing he says after he catches his breath is, 'esta bien.'"

The two girls just visited the men at the hospital and told us they are doing well.