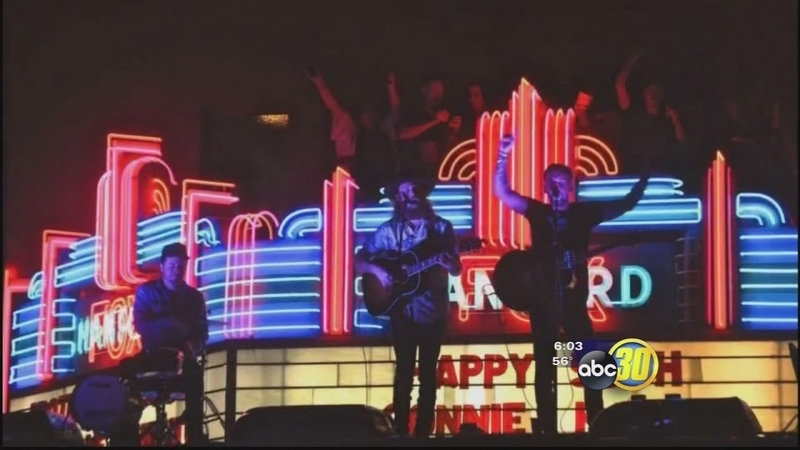 FRESNO, Calif. (KFSN) -- Concertgoers in Hanford had to roll with the punches Saturday when material from the roof at the Hanford Fox Theatre crashed onto the stage.

The incident happened Saturday night as The Brothers Osborne was preparing to start the show. No one was hurt, but the owner said he tried searching for a place that could accommodate the crowd and band but none were available.

So, the band picked an unusual and unexpected location. Standing on top of a tour bus, the country duo performed some of their hits as a crowd of about 300 people watched from the street.

Just before the 7 p.m. concert, a piece of the building's roof collapsed on stage.

"All of a sudden, we just see something start falling and crash," concertgoer Rozanne Hernandez said.

Hernandez was sitting in the third row with her boyfriend when it happened.

"A few of the guys setting up the stage ran out and one of them grabbed two of the guitars right away and put them in the back," she said.

This isn't the first time the building has had structural issues. Two years ago, the nearly 90-year-old theatre closed for reconstruction after a portion of the concrete ceiling caved into the auditorium.

Unsure if something like that was going to happen again, owner Danny Humason canceled the concert inside the famous south valley landmark as a precaution. But the band wasn't ready to call it a night just yet. The reigning CMA Vocal Duo of the Year moved their concert outside and played about four of their songs in the rain.

"It was actually cool that they came out and did that," Hernandez said. "They at least did a little something for us so that we weren't totally left out from the total performance."

It wasn't even a first for the band though. A similar incident happened at their show in Boise. The band posted on Facebook, "For the second time in two weeks the ceiling caved in at one of our shows so we moved the party to the top of the bus."

And they added it was one of the most memorable moments of their career. The police chief for the city of Hanford says typically a permit from the city is needed for something like a street concert. But because of the circumstances, they were okay with it and were prepared to shut it down if it got out of control.