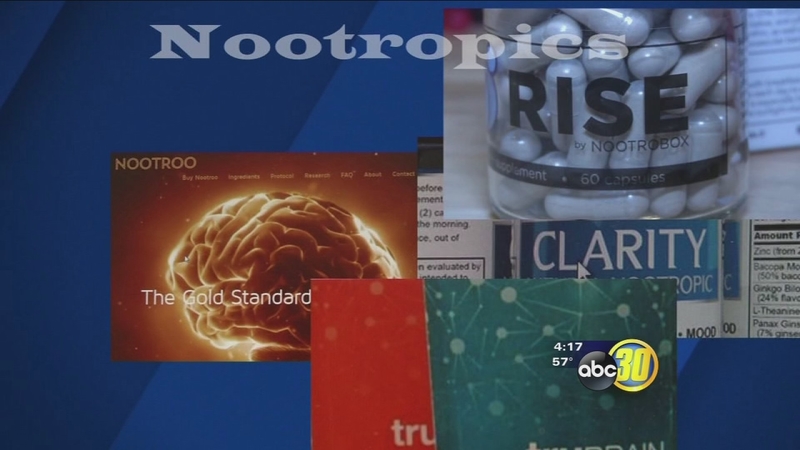 FRESNO, Calif. (KFSN) -- A growing trend of supplements aimed at bolstering brainpower is making its way to the Central Valley.

Whether they're targeted at weight loss or body building in pill or powder form, we've all seen supplements. But what if one was marketed to make you smarter? A growing wave of products is aimed at doing just that.

"It gives me kind of the clarity of mind I need to make better decisions," he said.

"If you think about vitamins that you would take normally for your body, for your overall body health, these are very similar, but they're targeted for brain functions," he said.

The supplements are called Nootropics - based on the Greek word for mind. Formulas vary, with some with familiar ingredients like vitamin b and caffeine. Most list a mix of ingredients that some believe boost brain power. Stanford grad Geoffrey Woo founded Nootrobox.

"Wow well you can focus, how well you can sustain attention," Woo said. "Your working memory, and how you deal with stress. So, Nootropics helps enhance various aspects of that."

When you hear Nootropics being coined a "cognitive enhancer" you may think of a scene from "Limitless." The thriller starring Bradley Cooper who plays a struggling writer introduced to a pill to enhance his brain power.

Nootropics don't pack that big of a punch but users say it gives them a competitive edge.

"Things are coming to you, you're having good ideas," Hernandez said. You feel energy."

"What we are looking for is, you know, 10 to 15 percent improvement in like ability to memorize or ability to react faster," Nobosod said.

Experimentation led to pills and powders, increasingly popular with Type-A achievers nationwide. The so-called cognitive enhancers can be found online or in health food stores with no prescription needed.

"For a short period of time, these things may provide some performance enhancement," he said. "In the long term, there's often a side effect and that's the problem with over the counter."

Stecker says when it comes to being mentally sharp, general health plays a big role. Adding normal diet and exercise can increase focus.
Despite questions some may have about possible long-term risks, the Nootropics market is growing. Driven in part by users who believe they are seeing gains in their mental performance.