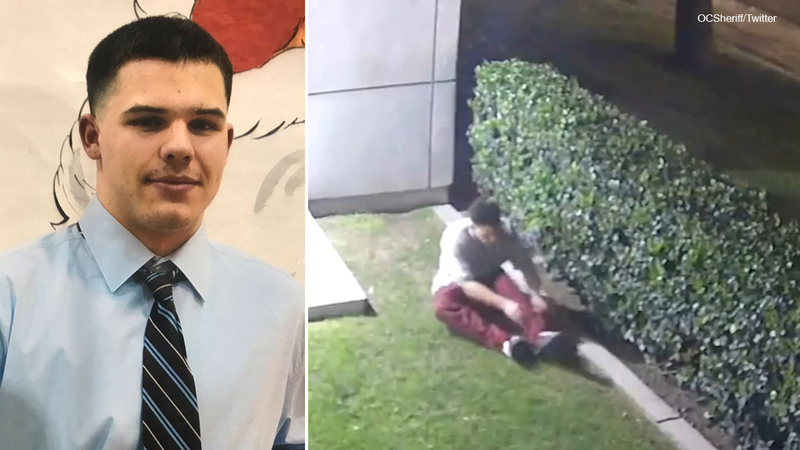 ORANGE, Calif. -- A 15-year-old suspect accused of stabbing his mother to death two years ago has been found after he escaped from Orange County Juvenile Hall early Friday morning, authorities said.

The Orange County Sheriff's Department tweeted shortly after 9:30 p.m. that Ike Souzer is back in custody after being found at a McDonald's in Anaheim.

#OCSDPIO Juvenile Ike Souzer escaped from @OCProbationDept Juvenile Hall is back in custody. Press update at 10pm outside Lamoreaux. #JHEscape

Souzer, who had been in custody since 2017, escaped shortly after midnight from the facility at 331 The City Drive South in Orange, according sheriff's officials. The facility is managed by the county Probation Department.

Investigators said the suspect managed to get out of a locked housing unit and make his way off of a roof and over an exterior barbed-wire fence. Surveillance footage showed him tending to his leg after scaling the fence, officials said.

"It was in a locked room and then he got outside of that room and made his way outside of our facility by climbing over a fence," Chief Probation Officer Steve Sentman said.

Souzer was discovered missing after a routine head-count. He was described as white, about 6 feet tall, weighing 200 pounds and wearing a white shirt and red pants, the Orange County Sheriff's Department said. He may have a laceration on his left leg.

Souzer is accused of stabbing his mother, Barbara Scheuer-Souzer, to death in Garden Grove in May 2017. Garden Grove police said the teen was on trial this week.

The suspect's grandmother spoke to Eyewitness News in an interview at the time and said Souzer struggles with autism.

Ty Swanson told Eyewitness News he was locked up in the same unit with the escaped teen last year.

"Someone would have to open the door for him, and he would also have to have a key to get up to the roof because the stairs -- in the unit I was in with him, I don't know if he was in a new unit -- but there had to be a key to open it and exit it," he said.

Swanson, not surprised to hear who escaped, said Souzer often spoke of starting a riot to make his getaway.

While behind locked doors with the escaped juvenile, Swanson noticed Souzer's emotional battles.

"He was just a troublemaker, I guess," he said. "He had been on suicide watch before."

Officials warn that anyone who helped Souzer can be accused of harboring a fugitive and face extensive legal consequences.