Pentagon sending about 2,000 additional US troops to southern border 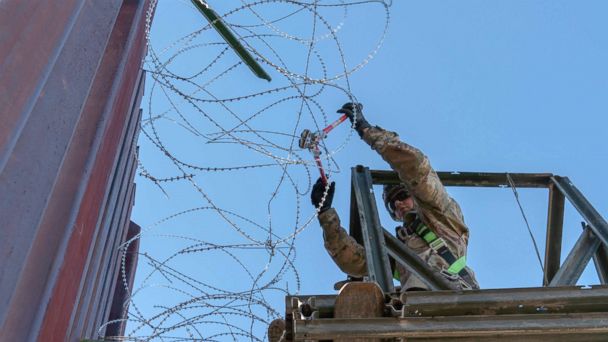 Approximately 2,000 additional active duty U.S. service members are expected to deploy to the southern border, many of whom will be used to build and reinforce about 160 miles of concertina wire, a U.S. official told ABC News.

"We are currently sourcing the units involved and there will be an increase of a few thousand troops," a Department of Defense spokesperson said in a statement on Tuesday. "We will provide more clarity on the numbers when we have it."

The additional forces will bring the total number of troops to nearly 4,500, but that number will be temporary as some units are expected to return to their bases, the official said.

At the mission's peak in December, about 5,900 service members were deployed. There are also about 2,200 National Guard troops who have been serving on the southern border since last April.

The additional concertina wire is part of the latest Department of Homeland Security request to the Pentagon for additional support, which was approved by Shanahan earlier this month. Since the fall, military engineers have already built approximately 70 miles of wire obstacles and placed movable barriers at 22 ports of entry in Texas, Arizona and California, according to the Department of Defense.

When the active-duty mission was first announced in late October, it was originally slated to only last 45 days, but has been extended twice. Now both the active duty and National Guard missions are slated to continue through Sept. 30.

The deployment of active duty and National Guard forces is already estimated to cost taxpayers $682 million.

At a House Armed Services Committee hearing on Tuesday, Navy Vice Adm. Michael Gilday, the Joint Staff's director of operations, acknowledged the Guard mission from last April through the end of September was estimated to cost $550 million, while the active duty deployment from this fall through the end of January was about $132 million.

There is not yet an estimate for the active duty mission from February through September, so the $682 million total estimate is sure to rise.

"This support is now transitioning to the operation of mobile surveillance cameras in support of [Customs and Border Protection (CBP)] and all nine border patrol sectors across four states. And the emplacement of concertina wire on existing barriers at areas designated by CBP between ports of entry in Arizona and in California," Gilday told the committee.

In response to a migrant caravan making its way to the United States from Central America, President Donald Trump ordered active duty troops to the border just days before the 2018 midterm elections in what critics decried as a political stunt. But Gilday defended the mission.

"We believe that our military's presence and support have served to increase the effectiveness of CBP's border security operation by enabling them to focus on their law enforcement duties at our ports of entry," he said. "We're not trying just to have a photo op down there."

Under Secretary of Defense for Policy John Rood told the committee that the Department of Homeland Security is currently tracking three separate migrant caravans heading to the southern border, with one estimated to include about 12,000 people.