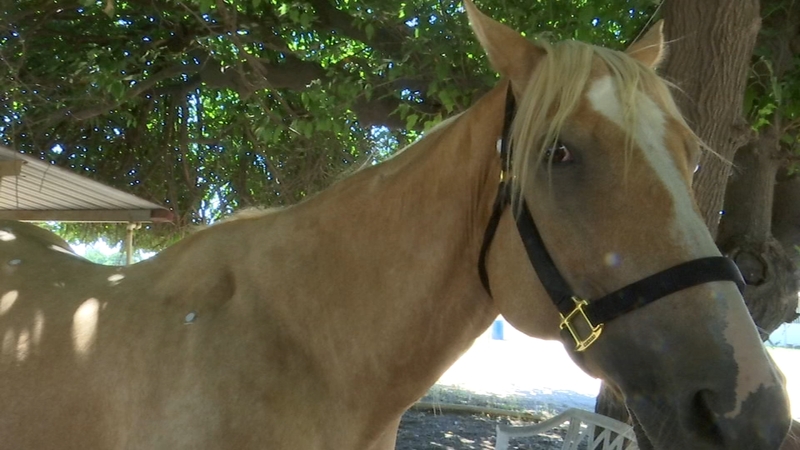 Her heart nearly broke on July 2.

Fresno County sheriff's dispatchers called and told her they found her horse dead from gunshots in the same incident where a deputy got shot.

It took her several hours to find out the death notice was premature.

After sheriff's deputies cleared out an injured deputy and arrested the suspected shooter, a neighbor saw Sunshine standing up.

The sheriff's office brought a horse trailer to haul away Sunshine and some other animals, so Lisa is deeply grateful to the deputy who saved her horse.

She tracked down her Sunshine at a vet's office the next day and found out the horse suffered nine gunshot wounds, but she'd survive.

A week later, she went home wearing several acupressure patches to help with healing and pain control, but otherwise mostly back to normal.

"She's settled down now, so this is more kind of her where she's chill, but very interested in her surroundings and what's going on," Lisa said.

Most of the bullets are still inside Sunshine's body, but she's a tough horse.

She overcame founder a few years ago and got back to riding, and after dodging death again, Lisa's hoping she can get back in the saddle for years to come.

"Dr. Ford says I will ride her again, which is wonderful, but if that never happens, that's just fine because she's alive," Lisa said. "She's with me and she always will be. She's got a home for the rest of her life."

Lisa said a lot of people have asked her if they could donate to help Sunshine recover, but she has equine insurance, so the medical bills are covered.