Police made an arrest and seized almost 1,000 marijuana plants at a home in Los Banos

"It's illegitimate. Obviously it's for the purpose of sales and it's not something you're seeing for medicinal purpose," said Sgt. Justin Melden.

Police say this all happened steps from a playground. Inside the home, the growers were using illegal electrical bypass to steal hundreds of dollars' worth of power that could have sparked a fire at any time. Los Banos detectives say these large scale grows are becoming all too common.

"It is something we're seeing an increase of within the last few years. We've had about 50 in the city limits," said Sgt. Melden.

Authorities say it is not just in Los Banos but in all of Merced County.

Sheriff Vern Warnke took photos and says massive illegal grows are prevalent throughout all of the county.

"The houses are close enough together. It's conceivable. House goes up in flames--start a chain reaction. We don't want that to happen. Do it right, do it legal," said Sgt. Melden.

However, with recreational marijuana sales becoming legal in a couple of months. Warnke still believes illegal grows will be a problem.

"I'm looking at going at the landowners themselves for allowing this to happen if it continues. We've got to stop this," said Sgt. Melden.
Report a correction or typo
Related topics:
los banosmercedcaliforniamarijuanaillegal drugsmerced
Copyright © 2020 KFSN-TV. All Rights Reserved.
MARIJUANA 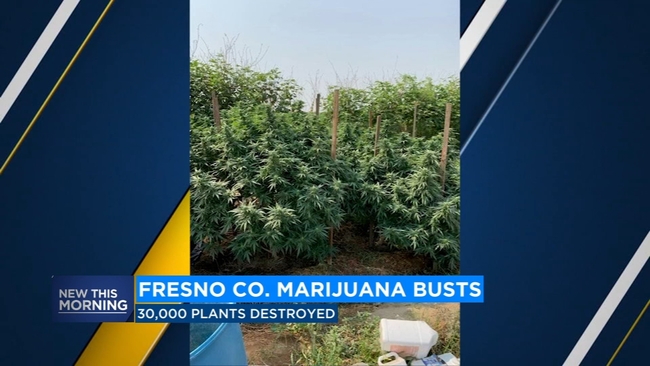