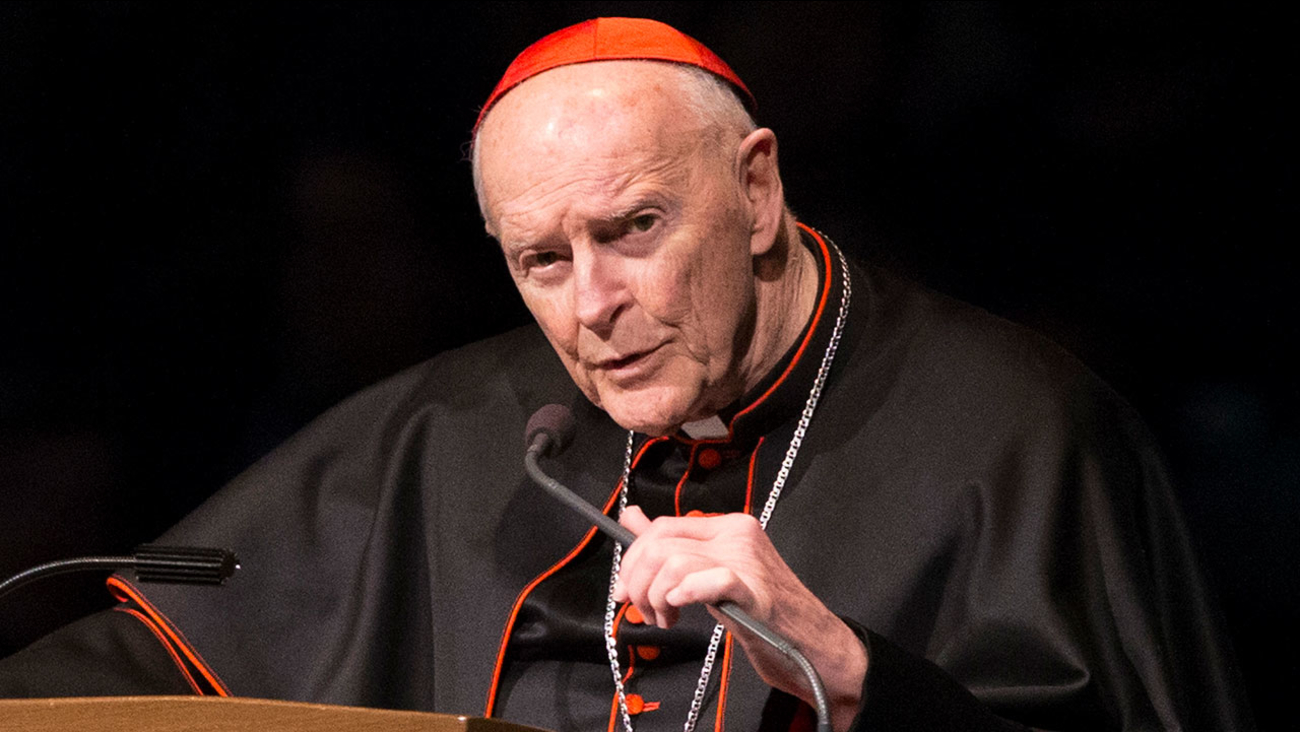 VATICAN CITY (AP) -- In a move seen as unprecedented, Pope Francis has effectively stripped U.S. prelate Theodore McCarrick of his cardinal's title following allegations of sexual abuse, including one involving an 11-year-old boy. The Vatican announced Saturday that Francis ordered McCarrick to conduct a "life of prayer and penance" before a church trial is held.

Breaking with past practice, Francis decided to act swiftly on the resignation offered by the emeritus archbishop of Washington, D.C., even before the accusations are investigated by church officials. McCarrick was previously one of the highest, most visible Catholic church officials in the United States and was heavily involved in the church's yearslong response to allegations of priestly abuse there.

Francis received McCarrick's letter offering to resign from the College of Cardinals on Friday evening, after a spate of allegations that the 88-year-old prelate had for years sexually abused boys and had sexual misconduct with adult seminarians.

The pope then ordered McCarrick's "suspension from the exercise of any public ministry, together with the obligation to remain in a house yet to be indicated to him, for a life of prayer and penance until the accusations made against him are examined in a regular canonical trial," the Vatican said.

The McCarrick case posed a test of the pontiff's recently declared resolve to battle what he called a "culture of cover-up" of similar abuses in the Catholic church's hierarchy.

McCarrick had already been removed from public ministry since June 20, pending a full investigation into allegations that he fondled a teenager more than 40 years ago in New York City. McCarrick has denied these allegations.

Another alleged victim, James, says McCarrick exposed himself to him when he was 11 and continued a sexually abusive relationship with him for more than two decades. McCarrick has not responded publicly to these accusations.

Asking to be identified by only his first name to protect his family's privacy, James told The Associated Press on Saturday that he hopes the pope's approval of McCarrick's resignation will help other victims "become free."

"Basically, truth always prevails," said James, who lives in Virginia. "Thankfully, everybody in today's world is more understanding of the harm done by individual priests, and now we can start to heal."

McCarrick's alleged sexual misconduct with adults was reportedly brought to the Vatican's attention years ago, including before McCarrick was appointed to the prestigious archbishop post in the U.S. capital in 2000 by then-pontiff John Paul II.

Two dioceses in New Jersey, Newark, and Metuchen, say they have settled two of three complaints of misconduct by McCarrick toward adults.

The Vatican on Saturday didn't say where McCarrick would be confined nor when a church trial might begin, and its brief statement did not even allude to the grave accusations against the prelate.

McCarrick rose steadily and swiftly up the U.S. church's ranks, from auxiliary bishop in New York City to bishop in Metuchen, to archbishop of Newark, and then to Archbishop of Washington, D.C.

A Catholic University canon law expert, Kurt Martens, noted this was the first time an order of penance and prayer had been issued before a church trial.

Other U.S. Catholics who follow sexual abuse scandals hailed stripping McCarrick of his cardinal's rank as an unprecedented shift in how the Vatican has dealt with allegations against top churchmen.

The pope appears to "understand the gravity of the situation and further harm to the Catholic church's status," he told the AP.

McKiernan wondered if the church investigation will reveal who among its hierarchy knew about the sex allegations against McCarrick and whether the Vatican will move to punish those clerics as well. He noted that the Vatican statement didn't spell out why the pope was disciplining the cardinal.

"We're still in the old world," McKiernan said, referring to the Vatican's avoidance of details about the abuse allegations against McCarrick. "(Still) it's a remarkable development."

In the case of Scottish Cardinal Keith O'Brien, accused by former seminarians in 2013 of sexual misconduct, Francis only accepted his resignation after the Vatican's top abuse prosecutor conducted a full investigation, two years after the first revelations, and after the prelate himself relinquished the privileges that come with a cardinal's rank.

O'Brien, who died earlier this year, still remained a cardinal, however.

The Rev. James Martin, editor-at large at America Magazine, which covers church issues, noted in a tweet that Bernard Law was allowed to stay a cardinal after he resigned as Boston archbishop, following revelations that he had sanctioned the systematic cover-up of pedophile priests while presiding over that U.S. diocese.

After resigning from his Boston post, Law was transferred to a prestigious job at a Rome basilica, an appointment that triggered outrage from many abuse survivors. That happened under Pope John Paul II, who was widely considered to have underestimated the scope of the sex abuse scandals worldwide.

One of Francis' closest advisers, Cardinal George Pell, is the highest-ranking Catholic in the world to be charged in the church's global abuse scandal. The 77-year-old faces trial in his native Australia on decades-old child sex abuse allegations. Pell has denied wrongdoing. Details of the allegations haven't been made public.

Bishops have been implicated in the sexual abuse scandals that have stained the Catholic church's reputation worldwide for decades, most often for their roles in covering up for pedophile priests by shuffling them from parish to parish and keeping the faithful in the dark about the allegations.

Earlier this month, an Australia bishop became the most senior Roman Catholic cleric to be convicted of covering up child sex abuse. Adelaide Archbishop Philip Wilson was sentenced to 12 months in detention by an Australian court in a landmark case seen as a strong warning to institutions that fail to protect children.

Critics of the Vatican's handling of abuse cases point out that despite recommendations from its advisory panel, the Holy See still hasn't set up a tribunal or other system to deal with accused bishops or cardinals.

It still is unclear just what church tribunal would decide McCarrick's case.