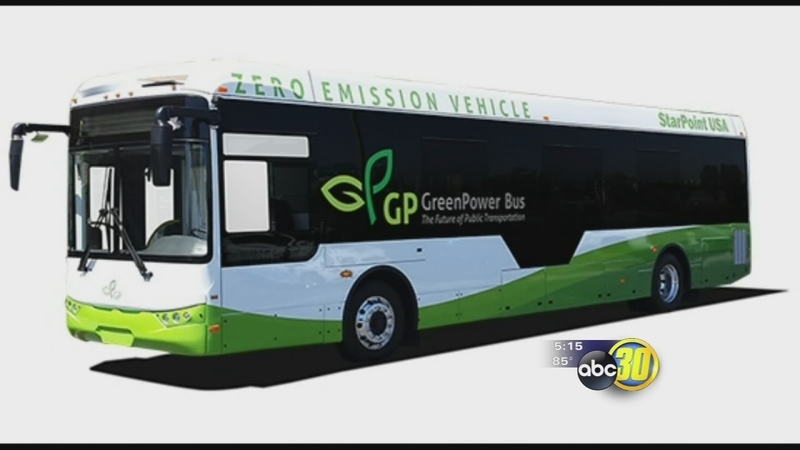 PORTERVILLE, Calif. (KFSN) -- After months of being under-wraps, an electric-powered bus business venture is coming to Porterville.

Nearly 10 acres of empty, dry land will soon be taken over by something very green.

It took many months of quiet planning between the company and the city.

In fact, two other existing locations in the city didn't work out, but Porterville's city manager says this space will allow them to build what they want.

He says it's pretty much a done deal, and it's a deal they couldn't be more excited about, especially as green, clean energy continues to evolve in California and across the country.

"There are billions of dollars that are looking to be programmed over the next several years into low-carbon emission vehicles, electric vehicles," city manager John Lollis said.

The company will create 50 to 60 jobs at first, but as they transition to manufacturing the parts for their vehicles on site, that number could easily top 3-hundred.

The news is already drawing comparisons to the WalMart distribution center on the city's south side, it's another company that brought hundreds of jobs to Porterville when it opened 25 years ago.

"Similarly, people will say, "Okay, well I've never heard of Greenpower Motor Company but I've heard of electric buses," Lollis said. "It is certainly an industry that is in its infancy and going through maturation now."

"And certainly as you look to the future over the next decade or more you'll see that this will be an industry that greatly expands in the Central Valley and all over the state of California."

"I think this shows the value of Porterville," Chamber of Commerce CEO Stephanie Cortez said. "And we're really excited to see this happening for our little, small community.

Cortez says this is a big bang for Porterville and believes this company will offer residents careers, not just jobs.

But she encourages anyone who's interested in applying to be patient.

Construction on the site near the Porterville Municipal Airport is expected to start this summer.

The assembly line should be running by early next year.