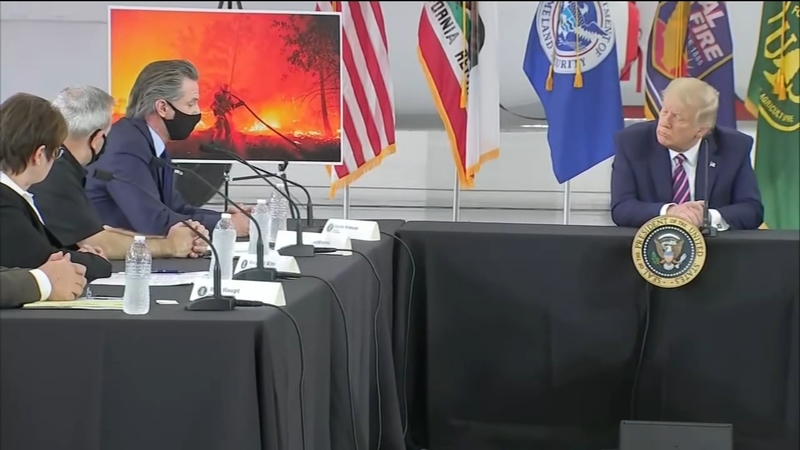 FRESNO, Calif. (KFSN) -- Air Force One flew in through smoky skies and landed at the Sacramento McClellan Airport, which also serves as a filling station for Cal Fire's very large air tankers.

President Trump told reporters that California and other western states must do more to clear dead trees and other vegetation from forests to keep wildfires from exploding as they have in recent years.


He then went into a briefing, during which Governor Gavin Newsom said climate change is exacerbating the fire conditions.

While the two leaders often do not see eye to eye, they have both said recently they are working together to support firefighters and residents impacted by the infernos.

"In August, I approved a major disaster declaration for California,' the President said. "I've approved, I think, Gavin, 40 Stafford Act declarations, so very quickly because we want to get this thing taken care of, including fire management assistance grants to help states stop the fires."

Sheriff Margaret Mims spoke during the briefing about some of the impacts the massive Creek Fire has had in Fresno County, and she presented a list of request in writing to support families, businesses, and ranchers who are suffering from massive losses.


"One of our asks was to have a FEMA representative actually in our emergency operations center, and I got a verbal agreement for them to do that today," she said.

A large group of President Trump supporters gathered outside the briefing area, along with a smaller number of people protesting against his visit.