"It's pretty simple, you just wrap the house in a shingle-type fashion so it's overlapping going down so the stuff that goes down doesn't get into the cracks"
KFSN 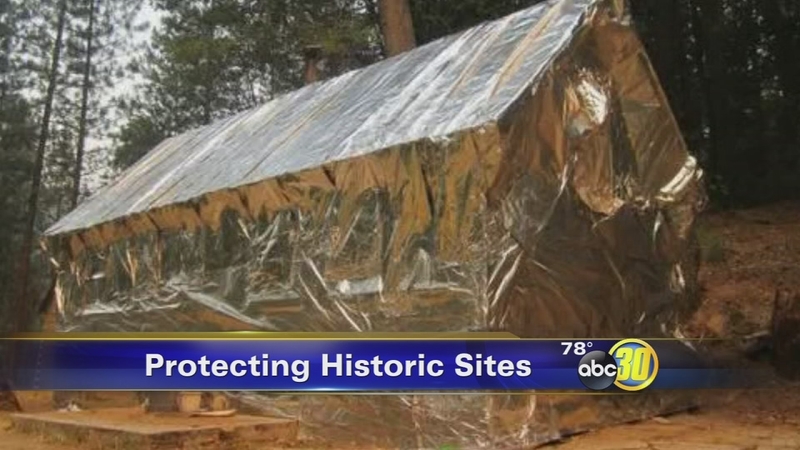 Historical cabins wrapped to protect them from French Fire

FRESNO, Calif. (KFSN) -- Firefighters are still on the front lines of several intense wildfires across the state. And crews are using unique tools to protect historical sites on the French Fire.

Despite the fire's massive size, no buildings have been destroyed yet. Archaeologists are working with other firefighters to protect several historical guard stations using, what's essentially a protective foil wrap.

Crews rushed this weekend to cover five historical cabins at the Placer Guard Station. "We ordered this wrap," said US Forest Service archaeologist Ward Stanley. "It looks like tin foil.

"It's pretty simple, you just wrap the house in a shingle-type fashion so it's overlapping going down so the stuff that goes down doesn't get into the cracks," Stanley said.

The wrap is similar to fire shelters that crews can use in an emergency, for personal safety. The building wrap is thicker. And while it's said to protect from most radiant heat and burning embers, the Forest Service says it's not fire proof.

A wrap is commercially available online through at least one company called Firezat.

Firefighters say foam can also be used to insulate buildings and homes from the heat and flames.

The French Fire is now more than 13,700 acres in size and finally about 40 percent contained. But flames are still pushing out further into the forest.

Firefighters say drought conditions are causing these fires to burn much hotter than typical wildfires. Crews are seeing a dramatic increase in embers from burning trees traveling out and setting spot fires.

More than 1,800 firefighters are working from a camp near North Fork to help with the French Fire.

At least one firefighter suffered a second-degree burn to his leg, officials said. But other than that there have been no major injuries here at the French Fire.

Fire crews will begin fire line suppression repair work, which is repairing or improving fire damaged lands unlikely to recover on their own. The extent of repair will vary depending upon intended use after the fire. For example, the dozers will pull berms back onto the trail and return the line to original grade to prevent concentrations of water flow. Fire hand crews will construct waterbars at or below the slope break. After the fire is cold, slash and debris can be scattered along the length of the fire line.

Evacuations
Residents living in the community of Arnold Meadow were notified to evacuate due to increased fire activity along the northern perimeter of the fire. Several summer homes in the Hogue Apple Ranch and Wagner's Resort were evacuated earlier in the week.

Closures
A Forest Service Area Road and Trail Closure, Forest Order # 15-14-07, has been issued for the French Fire area. More information about the Forest Closure and the closure can be found at: http://tinyurl.com/o44cvyu.