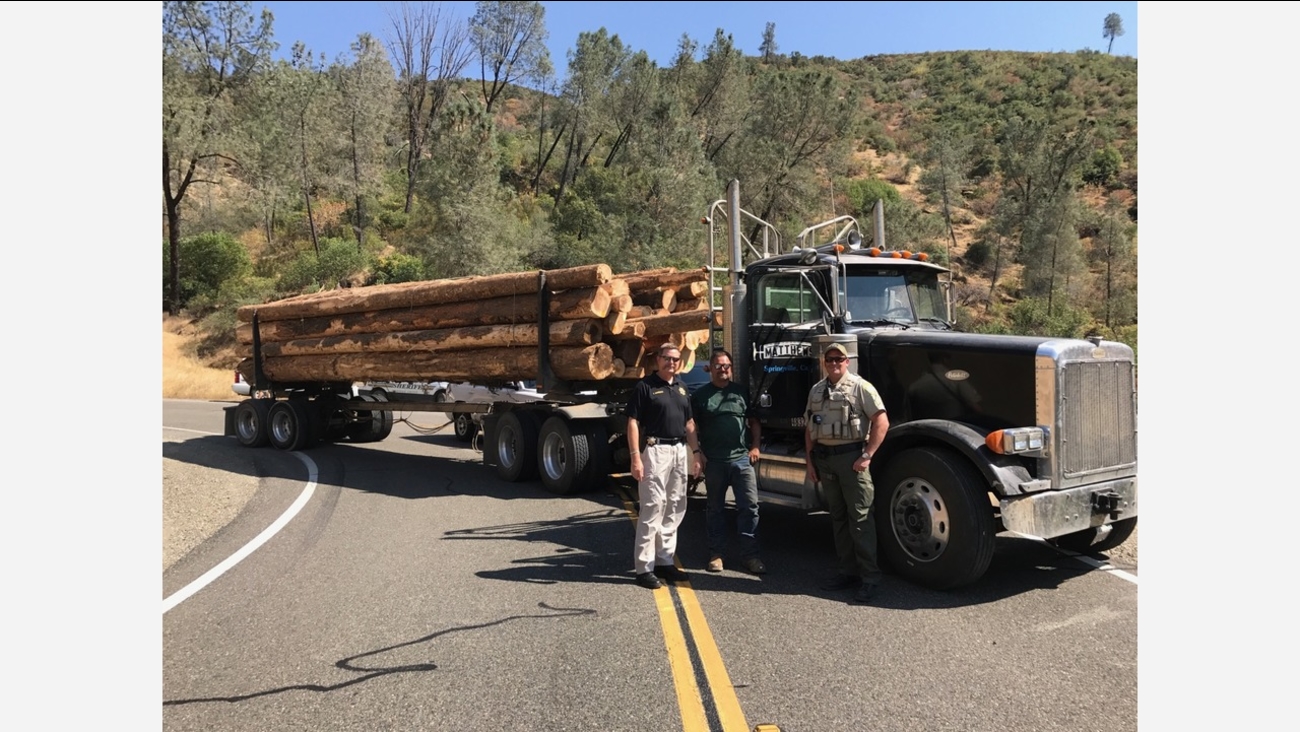 FRESNO, Calif. (KFSN) -- Mariposa County Sheriff's Deputies said they were prepared to use "Stop Sticks" on a high speed pursuit suspect, and were in perfect position to do so, but due to the size and weight of the commercial dually truck there was a concern the sticks might spark a fire. So, Deputies decided to call on the help of a logging truck. The driver of the logging truck was willing and happy to assist.

The vehicle, described as a commercial Ford F550 Flatbed Utility Truck pulling a trailer with a construction vacuum, was stolen out of Merced on Wednesday. A CHP aircraft was tracking the vehicle when Mariposa County Sheriff's Deputies intercepted the stolen truck on Highway 132 just above the Horseshoe Bend Recreation area at approximately 3:15 p.m.

Multiple Sheriff's Deputies continued to follow the stolen vehicle for approximately 25 minutes as the driver attempted to evaded law enforcement. The driver pulled on and off the roadway multiple times and his speed ranged from 20-60 miles per hour, frequently crossing the center line into oncoming lanes.

Once the driver of the stolen vehicle saw the logging truck blocking the road he stopped. Ultimately he surrendered to the Sheriff's K9 Deputy and the other officers on scene after multiple verbal commands and uncooperative behavior.

Video of the end of the pursuit and arrest can be seen here:

No one was injured and it appears there was no damage to any property or the stolen vehicle. The stolen vehicle was equipped with expensive work equipment and trailer, worth thousands of dollars.

"Due to the drivers unsafe operation, and the weight of the stolen commercial truck involved, it was important to stop the driver as soon as possible. The size of truck would demolish a smaller passenger vehicle. The communication and coordination between agencies involved helped bring this event to a stop, without injury to anyone. Utilizing resources available to help support public safety is always an option to our Deputies, and the cooperation demonstrated by the Log Truck operator was welcomed. It's always great to see that level of cooperation between agencies and community. This outcome was the best possible. The logging truck driver was happy to help. Nobody likes a thief."- Sheriff Doug Binnewies