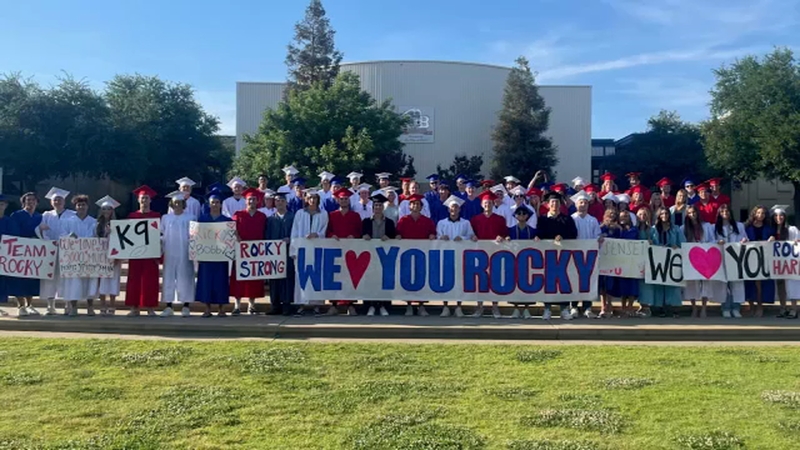 CLOVIS, Calif. (KFSN) -- Buchanan senior Rocky Reyes was diagnosed with leukemia last Saturday. He found out on his 18th birthday.

Rocky won't be able to walk across the stage this Tuesday for graduation.

The two-sport athlete is receiving an outpouring of support from the community as blood is in high demand at Valley Children's Hospital.

Summer Reyes saw her brother play in the postseason for Buchanan's baseball team less than two weeks ago, now she's watching her brother fight for his life.

"It was a big shock, it was almost unreal," she says.

"Everyone knows when Rocky is in the room, he's loud, fun, very outgoing, very competitive and athletics, he's just been one of my very best friends growing up."

Rocky is a two-sport athlete. He played on the Diamond and on the football field for the Bears.

The senior can't attend Buchanan's graduation on Tuesday but will be in the principal's speech.

"They have this thing going around - 'Rocky Strong' and 'Team Rocky'. I think that's really great," says Summer.

Rocky got into Arizona State University for his academics but his college experience will now have to be put on hold.

"He had his visit, his girlfriend goes there, everything was just coming together and now we have to wait and that's just what's really hard right now."

To make matters worse, there is a nationwide blood shortage due to the pandemic. Valley Children's Hospital is in need of blood donations for their cancer patients.

"His body was so low on platelets plus all the other patients, once my parents found that out it was like let's tell people because we need this now. Now it won't only just help Rocky but everyone else also," says Summer.

There are three different locations this week holding blood drives in Rocky's honor. Nemesis Sports Academy where he has trained for the past four years will be hosting one on Friday.

"We had him in here just a week ago prepping for the game, the unfortunate news hit him on his 18th birthday, just devastated him and his family," says Lazaro.

"I have a son, and I'll do anything for my son I can only imagine what the family and him are going through when he told me the news my heart just dropped."

"He's not the type to be emotional, but it's coming out that he feels so loved. I think that's what's getting him through it, you're in this room all day for the whole next month you can't see all of your friends. For him to know how many people care and are supporting is helping him a lot."