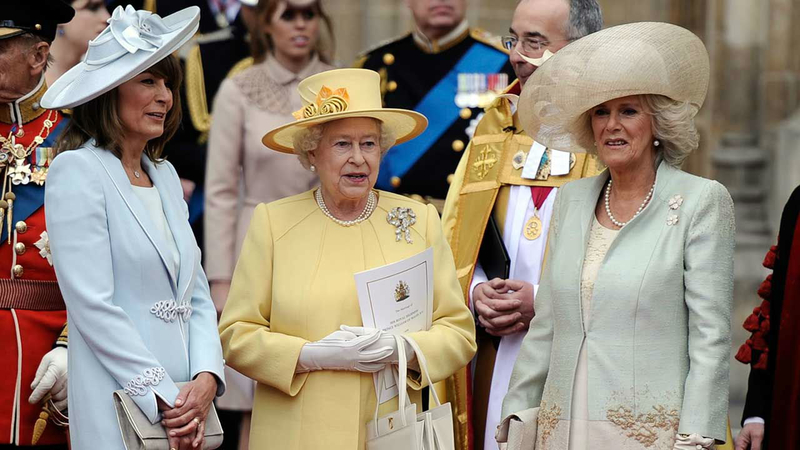 So you're still checking your mailbox every hour on the hour for your invitation to the Royal Wedding this weekend. But even if you are a last-minute addition to the guest list, you're not out of the woods yet. It may be the Social Event of the Decade, filled with glamour and excitement, but it's not exactly relaxing. There are a lot of etiquette and protocol rules you don't want to violate. Here are the top 6 do's and don'ts.

1. First, you can't just sit anywhere in the church. At an ordinary wedding, friends of the groom sit on one side of the room during the ceremony and friends of the bride sit on the other side. But Prince Harry and Meghan's wedding day is no ordinary occasion. When it comes to a royal wedding, the royal family tends to sit on the right side of the church, and the friends and family of the non-royal partner sit on the left side.

2. Second, don't even think about trying to catch the bride's bouquet. At most typical weddings, that tradition means the person who catches the bouquet is the next person to get married. It's a symbol of good luck. But in a tradition started by the late Queen Elizabeth, The Queen Mother, at her marriage to King George VI in 1923, royal wedding brides leave their bouquets at the grave of the Unknown Warrior in London's Westminster Abbey. The Queen Mother left her royal wedding bouquet at the grave in memory of her brother Fergus, who was killed at the 1915 Battle of Loos during World War I. Kate Middleton, Duchess of Cambridge, sent her bouquet to rest on the same grave, after her 2011 marriage to Prince William. It is likely that Markle will follow in Middleton's footsteps and do the same after her May 19 royal wedding.

3. If you're a woman, plan on wearing a hat to the wedding. Although it's not mandatory, female guests tend to cover their heads at a spring wedding with a hat or a fascinator. And they don't have to be subtle -- in fact, the wilder the design, the better! The daughter of Prince Andrew and Sarah Ferguson wore a hat that immediately spawned its own Facebook page and guaranteed her world-wide coverage.

4. Do NOT ever speak to the Queen unless she speaks to you first. If she walks up to you, you must bow or do a regulation royal curtsy. And under no circumstances are you allowed to touch or hug the Queen, unless she offers her hand to you for a handshake.

5. If you do meet the Queen, make sure you don't look like an idiot. Royal protocol dictates that guests should curtsy or bow their head to Queen Elizabeth, but a combination of the two is also acceptable. The Queen should be addressed as 'Your Majesty' and then 'Ma'am' if there is further conversation.

6. As with most typical weddings, don't wear white to the ceremony. It's traditional for royal brides to wear white, and Meghan is expected to follow royal protocol in this instance. If a guest chose to wear white they could upstage the bride, meaning fully white or majority white outfits should be avoided, in keeping with both regular and royal wedding etiquette. But there are exceptions. Pippa Middleton famously wore a plain white satin bridesmaid gown to her older sister Kate's wedding to Prince William in 2011, and nearly upstaged her. Years later, Pippa admitted she was surprised by the amount of attention her dress received. "I think the plan was not really for it to be a significant dress," she said. "Really just to sort of blend in with Kate's train." It did anything but.
Report a correction or typo
Related topics:
societyroyalsroyal familyroyal weddingu.s. & world
Copyright © 2022 KTRK-TV. All Rights Reserved.
TOP STORIES
Local jails, prisons see quarantine rise, ask for transfers to stop
2 killed in head-on crash in Fresno County, CHP says
Mobile home fire that killed Tulare woman now ruled a homicide
Van slams into front office of Tulare hotel, no injuries reported
Sex offender registration, no jail for former Valley teacher sex crime
2 men, 17-year-old boy arrested for deadly Ducor gas station shooting
CUSD to offer COVID-19 testing for students, staff to return to campus
Show More
Man accused of killing 75-year-old father near Porterville
EDD director resigns after just over 1 year in charge
10 injured in PA bridge collapse; human chain formed to help
Central CA Food Bank partnering with CVS to reduce food insecurity
Clovis doctor urges women to screen for cervical cancer
More TOP STORIES News