Protesters sound off at police commission meeting over SFPD shooting 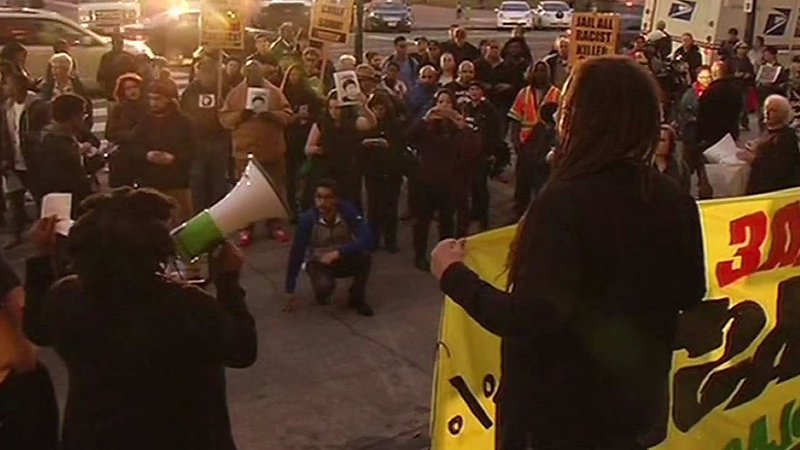 Protesters sound off at police meeting over SFPD shooting

SAN FRANCISCO -- Hundreds of people packed San Francisco City Hall Wednesday night as protesters expressed their outrage at the city's police department, after a stabbing suspect was shot and killed by officers.

The commission said everyone would be given a chance to speak during the public comment period and the line was endless. However, because not everyone was allowed inside the actual room at the same time, things got heated.

The night started with a rally on the steps of city hall.

Demonstrators want justice for 26-year-old Mario Woods, who was shot and killed by police in the Bayview. The shooting was captured on cellphone video.


The police commission heard public comment for nearly five hours until about 10:30 p.m. when the commission went into closed session. People forced to wait outside, chanted from the hallway while speaker after speaker addressed the commission and Chief Greg Suhr.

"I want you [Suhr] to resign and the five officers that did this, I want their job and to be brought up on charges, because it was senseless," said one woman to the commission.

"Mario Woods was a human being and you sit back there and check off boxes and you just file papers away and you forget that these people are human beings," said another woman.

"I'm not going to come in here and ask for justice, I'm going to tell you justice is coming for you!" said another man.

The issue before commissioners is the use of deadly force. Suhr said he'd like officers to have tools other than their guns.

"The London Police Department was able to subdue that subject with the use of a conductive energy device, we've had conversations here calling it a Taser," said Suhr. "That said, it worked."

"You're still training officers to brutalize black bodies. So whatever you're using, Tasers, shields or guns, the message still the same -- we're sub human, we're inhuman, therefore you can brutalize us as you feel," San Francisco resident Biko Eisen-Martin said.

What they want is for Suhr to resign and for the officers involved in the shooting to be charged with murder.

Suhr suggested last week, "Maybe we need other tools in our tool box that are short of deadly force."

Tasers will be a centerpiece of the police commission's review of police lethal force policies.


Police union president Martin Halloran, who also supports Tasers, puts it this way, "We're only one of two large law enforcement agencies in the country that do not have Tasers."

However, cardiologist Dr. Zian Tseng says research shows that Tasers, when improperly used, could also be lethal. Tseng collected sudden death incidents from 50 police agencies five years before they got Tasers and then five years later.

He found a striking 600 percent increase in sudden death incidents the first year police used them. That spike eventually leveled off, but it was still high -- about 40 percent more sudden deaths than before Tasers were used. His conclusion was that police were using their Tasers too often.

Tseng said, "Perhaps lack of recognition of the risks and once those events happen, there's an adjustment to policy or protocol to mitigate some of that risk, but not all that risk."

Tseng also found a surprising increase of police shootings the first year they used Tasers, surmising that Tasers may have escalated some incidents where ultimately deadly force was used.