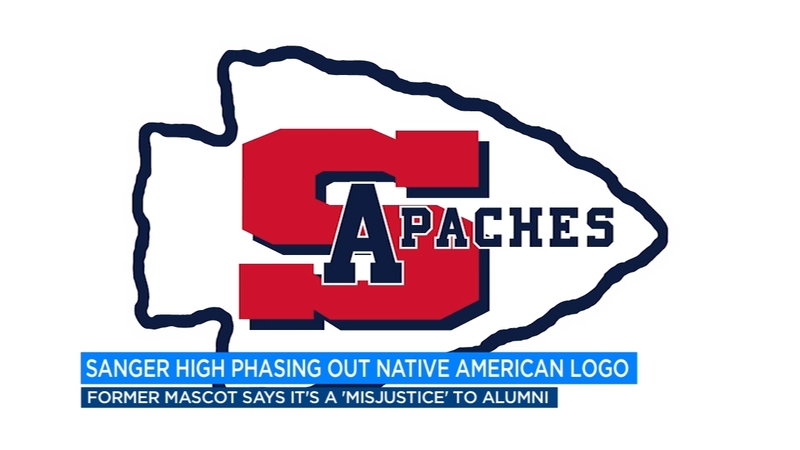 SANGER, Calif. (KFSN) -- The Sanger Unified School District says it has been phasing out its caricature logo for the Apaches at Sanger High School to make sure it is aware of and valuing cultural diversity.

The district made it clear the name of the school is not changing.

"I loved being the mascot and just encouraging people." Yelinek said.

She said she wore her handmade outfits with pride as a way to show respect and honor to the Apache Native Americans.

"There's a long time heritage with that, with that logo that goes along with it and people have a lot of pride in it." Yelinek said.

That's why she said she was disappointed to hear the Sanger Unified School District is phasing out the use of the Native American itself.

"I think they did a real misjustice against the people who have actually been there for decades." Yelinek said.

The Sanger Unified School District spokesperson, Cary Catalano said the change is part of a logo rebranding that happens from time to time.

LOGO CHANGE: The Sanger Unified School District says it is transitioning away from a caricature logo for the Apaches to an arrowhead to make sure it is aware of and valuing cultural diversity. The school will still be called the Apaches.
What do you think? @ABC30 pic.twitter.com/XMEfKl9Sq9

Catalano said Sanger Unified would utilize the arrowhead instead of the caricature to make sure the brand is communicated along with the current times.

"You know, it's not ok to use caricatures for different cultures." Catalano said. He said it may have been acceptable in the past, but "it certainly is not acceptable today."

RELATED: Fresno Unified school board votes to retire Fresno High's 'Warriors' mascot imagery
Catalano added the caricature would no longer be used to ensure they are sensitive to cultural diversity.

"A school logo does not define the school spirit," Catalano said.

District officials say the change did not require public comment because it is a typical rebranding.

For Yelinek, who still has her high school megaphones, she wishes the district would've included the community more, but says the change will not take away any former Apaches' memories or pride for the school.

The use of the Native American logo has not been completely phased out.

While ABC30 was in Sanger Friday our crew saw a large sign right at the front of Sanger High School with the Native American logo on it.