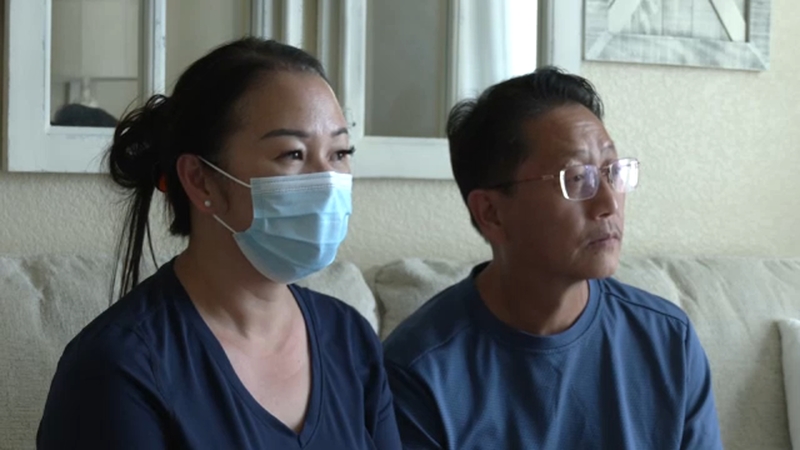 SANGER, Calif. (KFSN) -- A normal breakfast outing for a Sanger Unified Board Trustee and his wife turned into something far different after they became targets of racial harassment.

Brandon Vang and May Lee were sitting in a booth at a downtown Fresno IHOP in early August when a group of three white adults sat at a table behind them and asked each other a question.

"We didn't pay any attention to them until one of them asked the question very loud so we could hear it, and we heard it. 'How do you speak Chinese?' And the other person answered, 'ching chang chong.' and another person joined in making sounds similar," said Vang.

After scanning the room, the couple realized they were the only Asian Americans in the restaurant.

"I knew there and then that this was directed at us and no one else," said Vang.

In shock and fearing a confrontation may escalate the situation, Vang informed the restaurant manager on two separate occasions about what happened. He said they promised to forward his concerns to the district manager both times.

"About a week later, I wrote a letter to IHOP's headquarters in Glendale. And that's been over 30 days since that letter," he said. But according to Vang, IHOP never responded.

"I hope corporate America takes racism seriously. It's complicit when you are silent and I believe they are sweeping this issue under the rug," said Vang.

Vang and Lee believe the remarks were motivated by anti-Asian hate and comes as hate incidents against Asian Americans and Pacific Islanders are continuing to skyrocket during the COVID-19 pandemic.

The coalition Stop AAPI Hate tracks reports of racism and discrimination against Asian Americans and says it has received 9,801 firsthand complaints since March of 2020. 68 percent were cases of verbal harassment.

"Since the rise of anti-Asian hate, a lot of Asian Americans have really felt like they're walking on eggshells," said Chong Yang, chair of Fresno Chapter of the Asian Pacific Islander American Public Affairs. "Elders don't want to go to the store by themselves or go out on their own. Even young individuals, they're afraid of their mother or grandmother getting beat."

Capturing incidents on camera has become a popular tool of accountability. Vang and his wife attempted to do so but the racist remarks stopped before the recording.

"Our kids are both in high school now and just this year, we got them cell phones just so that if anything were to happen to them, they can get out their cell phone and record," said May Lee.

The couple says fighting violence and hate against the AAPI community requires keeping this conversation at the forefront.

Although they never imagined they'd encounter racist remarks firsthand, they say it won't deter them from continuing to build their home in Central California.

An IHOP spokesperson sent a statement in response to the incident:
"IHOP does not condone the insensitive comment made by a guest on August 3. The employee of the franchisee who operates this IHOP restaurant has spoken to the guest and apologized for the insensitive comments made by the other customer at the restaurant on August 3, 2021. IHOP and its franchisees do not and will not tolerate racism, bigotry or harassment of any kind. For more than 60 years, we have strived to create a warm and hospitable dining experience for all guests, and this isolated incident is not reflective of that ongoing commitment."
Report a correction or typo
Related topics:
fresnoracismasian americanrace and culture
Copyright © 2021 KFSN-TV. All Rights Reserved.
RACE AND CULTURE
Fresno State working to add women to CSU engineering faculty
New bilingual financial platform aims to help the Hispanic community
Local Muslim Americans discuss growing up in post-9/11 world
After 4 miscarriages, woman gives birth to miracle son
TOP STORIES
Fresno County detectives investigating homicide in Tranquillity
KNP Complex Fire: More evacuation warnings issued in Tulare Co.
Experts urging caution amid poor air quality in Central CA
FDA backs Pfizer COVID-19 boosters for seniors, high-risk
No prison time for attack on Armenian protesters
Scott Peterson to be re-sentenced to life this fall, judge says
Despite CA's lower COVID case rate, Valley has high transmission
Show More
Suspects to stand trial in 1996 Kristin Smart disappearance
Police: Man shoots estranged wife to death in Clovis, injures 1
Good Sports: Buzz surrounding city after Fresno State's win over UCLA
Fresno Unified hires counselor focused on preventing suicide
Fresno teen's life and death words in murder case
More TOP STORIES News