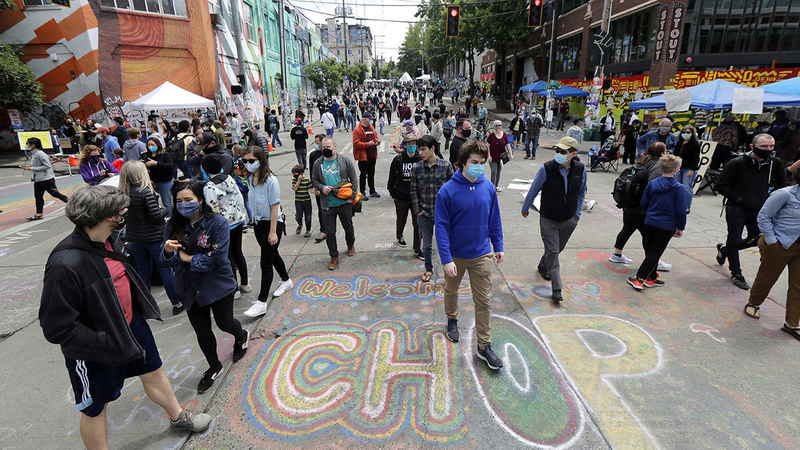 Seattle businesses file lawsuit against city for handling of 'CHOP'

SEATTLE -- A collection of Seattle businesses, property owners and residents sued the city Wednesday over its tolerance of an "occupied" protest zone, saying officials have been complicit in depriving them of their rights to their property.

The plaintiffs - including a tattoo parlor, auto repair shop and property management firm - emphasized in the lawsuit that they were not trying to undermine the anti-police-brutality or Black Lives Matter messaging of the "Capitol Hill Occupied Protest."

"Rather, this lawsuit is about the constitutional and other legal rights of plaintiffs - businesses, employees, and residents in and around CHOP - which have been overrun by the city of Seattle's unprecedented decision to abandon and close off an entire city neighborhood, leaving it unchecked by the police, unserved by fire and emergency health services, and inaccessible to the public at large," the lawsuit said.

The Seattle City Attorney's Office said it had not yet seen the lawsuit but would review it.

The "occupation" began June 8 when the Seattle Police Department, following days of intense clashes with demonstrators in the wake of George Floyd's killing by Minneapolis police, abandoned its East Precinct building in the densely populated Capitol Hill neighborhood. Protesters moved police barricades to block traffic, and scores camped in a nearby park.

The protest has drawn the scorn of President Donald Trump, who asserted it was being run by anarchists.

A festive atmosphere has prevailed for much of the time since then, with participants painting a large Black Lives Matter mural on the street and volunteers handing out free food. But openly armed "sentinels" have also kept watch, and the atmosphere has sometimes been more menacing at night. Police said typical response times to emergency calls in the area, which stretched several blocks, had tripled.

Mayor Jenny Durkan has expressed support for the protest, calling it "a peaceful expression of our community's collective grief and their desire to build a better world," and the city has helped it by providing different barricades to better protect participants from vehicles.

From June 12, 2020: Seattle Police Chief Carmen Best spoke on "Good Morning America" Friday, June 12, about the "autonomous zone" and the department's decision to abandon the precinct.

But following three shootings in the area on consecutive nights beginning last weekend, Durkan said this week the city would wind down the protest zone, at first by encouraging demonstrators to leave voluntarily, and that police would return to the precinct. But neither she nor Police Chief Carmen Best gave a specific timeline for when that would happen.

Patty Eakes, an attorney for the plaintiffs, separately told Durkan in a letter Wednesday that she wanted the mayor's office to provide a timeline by Friday for clearing out the protest and returning police, or the plaintiffs would ask the court for an immediate order that full public access be restored.

"City leadership have been on the ground daily having discussions with demonstrators, residents and businesses and trusted community-based, Black-led organizations to determine a path forward that protects the right to peacefully protest and keeps people safe," the mayor's office said in a written statement.

In the class-action lawsuit, filed in U.S. District Court, about a dozen businesses, residents and property owners said they had sometimes been threatened for photographing protesters in public areas or for cleaning graffiti off their storefronts. The owner of the auto shop Car Tender said a burglar broke in the night of June 14, started a fire using hand sanitizer as an accelerant, and then attacked his son with a knife when confronted.

The owner and his son managed to put out the fire and detain the burglar, the complaint said, but police never responded to their 911 calls. A large crowd of "CHOP participants" then came to the scene and forced the owner to release the arsonist, it said.

Other businesses, including the family-run label manufacturing company Richmark Label, said they had been unable to send or receive packages because delivery companies won't go near the protest zone or because access to their loading dock had been blocked by barricades.

Magdalena Sky, the proprietor of Tattoos and Fortune, said in the complaint she is a supporter of Black Lives Matter but that her business was down severely due to the protest. A physical therapist and wine shop also said clients or customers had been afraid to enter the area.

The complaint said that the city's decision to turn over the blocks and a nearby park to the demonstrators deprived them of their property rights without due process and amounted to an illegal gift of public property to the protesters.