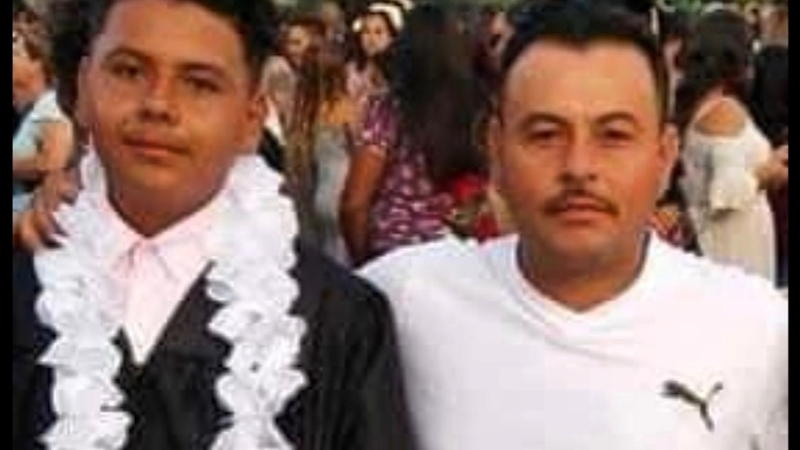 FRESNO, Calif. (KFSN) -- Flowers adorn a small memorial on Fifth Street in Fowler. It marks the place where a family was shattered Saturday afternoon.

Rafael Garcia and his 16-year-old son Jonathan were gunned down inside their home as other members of their family watched.

Within seconds, Magdalena Jacques lost her son and grandson. Through an interpreter, she said the loss is still sinking in.

"We were always getting together. That's something that's going to leave a huge hole in our heart because we were very, very close," she said.

Sheriff's detectives believe the suspect, Carlos Cruz, came to the home to settle domestic problems he was having with Rafael's daughter.

Investigators say the couple is married but recently split up and she moved back in with her family.

"He was there visiting his estranged wife and her family. After being there for several hours, a disturbance broke out, and it resulted in Cruz shooting and killing two of the woman's family members," says Tony Botti with the Fresno County Sheriff's Office.

Hours before they were shot, Rafael and his sons had worked a job together, pouring and finishing concrete. The homeowner, a neighbor, took a video of the project in what would be their last moments alive.
Cindy Mendoza said Rafael and his family were great people.

"We were just out here at lunchtime. He bought us lunch, and we sat and talked with him and everything... We've only known him for two weeks, but talking to him, it was like you knew him for a lifetime."

Detectives say the suspect led police on a pursuit and then was found dead after his car slammed into a train. An autopsy Monday revealed his cause of death was a self-inflicted gunshot wound.

The victim's family said Jonathan did well in his classes and also learned how to earn a living at a young age from his dad. It's now the memory that the father and son leave behind.

Detectives don't know if Rafael and his son were targeted or if they intervened in a domestic dispute. Cruz was arrested last month on domestic violence but bailed out of jail.

On Monday night, a family in mourning and a community grief-stricken came together to remember the lives of the two.

On Monday night, a family in mourning and a community grief-stricken came together to remember the lives of the two.

A group of more than 100 mourners gathered outside the steps of the Garcia home for a candlelight vigil.

"I just wish they're looking down on me and my family cause it hurts so much," said Brandon Garcia, Jonathan's oldest brother, at the vigil.

Magdalena Jaquez addressed the large crowd in Spanish, describing her son as an exceptional father, spouse, and son.

Mourners shared stories and shed tears as the crowd continued to grow in size.

Jonathan was a junior at Fowler High and would be celebrating his 17th birthday in September.

Steven Vargas, a youth soccer coach who mentored Jonathan, was in disbelief days after learning of the shooting.

"Jonathan was just a straight-up all-around great kid. When he was on the field for me, he gave everything he had. He gave his friends everything he had; he gave his team everything he had," he said.
Report a correction or typo
Related topics:
fowlershootingfowler
Copyright © 2021 KFSN-TV. All Rights Reserved.
TOP STORIES
CSU to require all students, staff to get COVID-19 vaccine
CDC expected to backpedal on some masking guidelines
19-year-old killed in head-on crash with drunk driver near Tulare: CHP
LIVE: Newsom to discuss health care accessibility in Central CA
Firefighter injured, several people displaced in NW Fresno
SB Hwy 99 fully reopened in Fresno County following semi crash
Sequoia Brewing appeals judge's decision to allow Tower Theatre sale
Show More
Bay Area teen attacked by crocodile while vacationing in Mexico
Yosemite Lakes Park arsonist to remain in custody for now
Simone Biles explains why she 'took a step back' from team finals
Kern County Sheriff's deputy among 5 killed during standoff
Man pleading guilty to 4 of 8 Atlanta-area spa killings
More TOP STORIES News