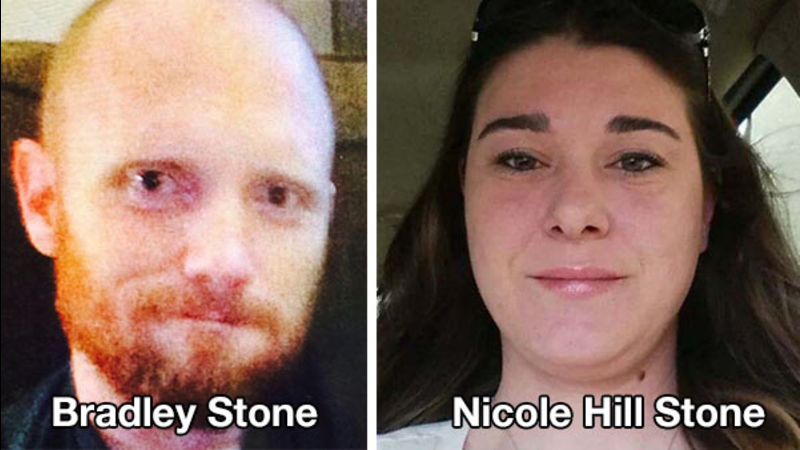 VIDEO: Sarah Bloomquist reporting from the scene in Pennsburg

SOUDERTON, Pa -- Authorities have identified the man sought in a Montgomery County killing spree that left six people dead and one person wounded.

All of the victims had a 'familial' relationship with Stone, the Montgomery County District Attorney's Office said.

The DA's office says Stone is described as 5'10" tall and weighs 195 pounds. He has a red or auburn beard and mustache with closely cropped hair.

Stone is known to use a cane or walker to assist him, the DA said, and he may be wearing military fatigues, in either sand or green color.

The DA says: "Stone should be considered armed and dangerous."

Police believe Stone is hiding inside a home at Pottstown Avenue and Main Street in Pennsburg.

A series of flash-bangs could be heard as police staged outside the home and officers could be heard on loudspeakers calling Stone's name. At one point, a team smashed into a garage and sent a robot inside.

"People in that area should remain indoors, keep their doors locked and call 9-1-1 if they think they have seen the suspect," the DA said.

Some Pennsburg residents were forced to leave their homes.

"It was kind of crazy. I got a bang on my door around 8:30 or 9:00. It was the SWAT team and they said we all had to get out immediately, that there was a problem on the street and we had to get out," said Shawn Hollister.

Five victims were previously known, but it is not known where the sixth person was killed. A total of four locations are involved in this incident, and bodies were found at three of those locations.

ONE DEAD IN LOWER SALFORD

Investigators believe it all began at 3:55 a.m. at the Pheasant Run Apartments the 100 block of Main Street in Lower Salford Twp. Police arrived to find a woman shot in the head. Two bullet holes in the wall could be seen from outside.

A neighbor there, who did not want to be identified, told Action News "I heard 3 or 4 gunshots. I heard the kids yelling, saying 'Mommy no! mommy no!'" He kept saying 'We gotta go, we gotta go."

The neighbor continued "I asked him if everything was okay and I saw the kids and the kids' father exiting the house and they didn't have any coats on or anything. They just had their pajamas on."

"He was like 'She's hurt pretty bad, we gotta leave," the neighbor continued.

Police confirm the suspect took two children from the Lower Salford Twp. apartment during this incident, but were found safe a short distance away.

Neighbors say there has been an ongoing custody dispute between the mother and father.

Meanwhile, we are being told the victim was engaged and her fiance is in police protection until the situation is over.

A second call came in half an hour later, at 4:25 a.m., for another shooting 100 block of West 5th Street in Lansdale.

Officers arrived at that location to find two more people shot and killed.

Neighbors say the two people murdered in Lansdale were Stone's 57-year-old former mother-in-law and her 75-year-old mother, who lived at that home.

People who live nearby say they often saw Stone confronting his ex-wife outside.

More victims were found at a home at Penn and Garfield avenues in Souderton, the home of Stone's former brother-in-law and his family.

It's not yet clear exactly how many people were killed there, but sources say a teenage boy was wounded with a gunshot wound to the head and flown to the hospital.

Neighbors say the family includes parents in their 30s with a 19-year-old son and a 12-year-old daughter.

Police initially thought Stone was still inside, so police staged outside. Nearby residents were evacuated, including Naomi Shaw, who was approached as she stepped out to walk her dog.

"They told me to stop immediately and they escorted me out of my home," Shaw said.

The situation came to an end around noon with a loud boom, possibly from a flash-bang, as police made entry into the home.