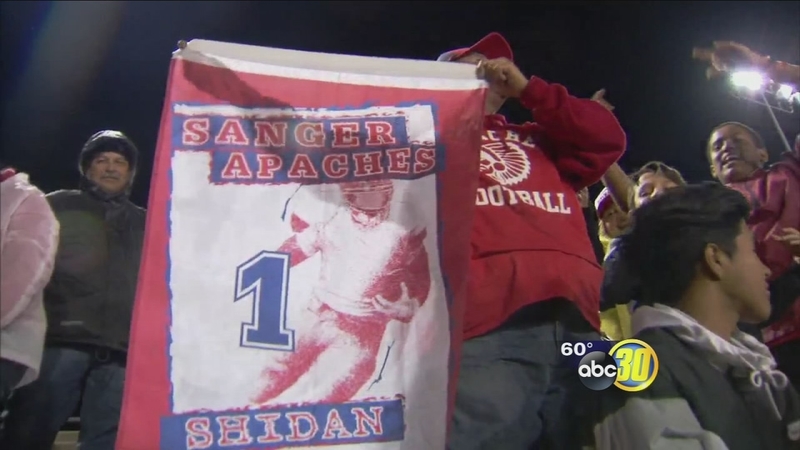 SANGER, Calif. (KFSN) -- Even through the rain, Apache fans remained faithful Saturday night and stuck through it in hopes of seeing their team take home a win.

It was a sellout game in Sanger as Apache fans bled red, white and blue both at Tom Flores Stadium and on the sideline. Saturday's game was an unprecedented one for Sanger High School, as the football team played in a playoff game for the state championship.

"We haven't been to the state playoff before," Sanger High alum Isaac Garza said.

Garza played center on the football team in 1998 and 1999, and he said being at the game was bittersweet.

It was also special for Marie Gonzalez. She was a cheerleader for Sanger High before graduating in 2001. Gonzalez was among the dozens who braved the rain to support their team.

Folks in the stands sat shoulder-to-shoulder, watching each play being executed on the field. But Ben Bergquam watched the historic game standing. His love for the team started after moving here two years ago. It's something that has now grown to a passion he shares with his neighbors

"For this city, it's the biggest game we've ever had, biggest game," he said. "I'm happy to be part of the community."

It's a community that lined up for hours just to see their hometown team play.