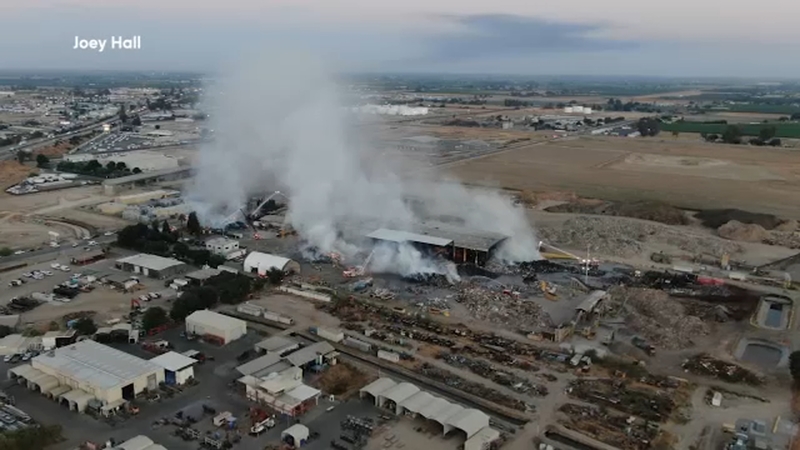 Nonprofit calling for action after fire in SW Fresno

FRESNO, Calif. (KFSN) -- A recent fire at a Southwest Fresno recycling center has lead one non-profit to demand change from the city.

"This is one example of what we see as a major problem for all of South Central," says Ivanka Saunders with the Leadership Counsel for Justice and Accountability

A fire at the Cedar Avenue Recycling and Transfer Station last Friday created smoke that could be seen for miles.

Residents and the property managers at the nearby Flamingo Mobile Home Lodge say it blanketed the property, making it hard to see and breathe.

"The whole trailer park, you couldn't see anything," says Durene Munson. "I didn't want to get out because of the smoke."

Members of the Leadership Counsel for Justice and Accountability say their members were helping distribute masks at the property, contacting residents and reached out to both the city and county to request assistance and even relocation for imapcted residents.

"There was no response from the city or the county," says Ridoberto Padilla.

Saunders says this fire is just one example of what's to come if more industrial development is brought into the region.

The organization is calling on the city to investigate the recycling center, complete the South Central Specific Plan, and stop new development.

"There are communities that are being impacted by the development, and that's a floodgate before the South Central Specific Plan is even finished," Saunders said.

Mayor Jerry Dyer says while the mobile home park is on a county island, the city did ask police and fire officials to check in on the nearby residents and smoke levels.

He says the city is in the process of doing an environmental impact study for the area involved in the South Central Specific Plan, which he says is the first step.

"It's for the purpose of determining what mitigation would need to occur in order to have any further industrial development that has to happen," he said. "They were going to do this three years ago."