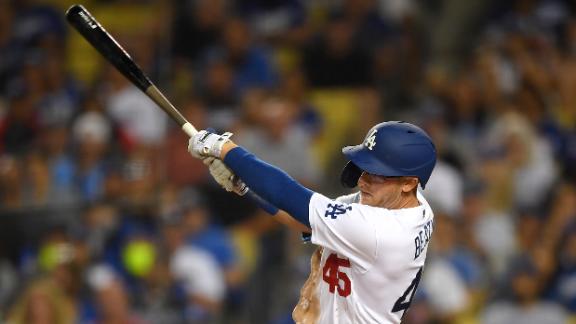 LOS ANGELES -- - Matt Beaty hit a tiebreaking, two-run double with two outs in the fifth inning to lead the Los Angeles Dodgers past the Pittsburgh Pirates 4-3 on Tuesday night.

The Dodgers extended their franchise-record winning streak to 15 games against the Pirates. Los Angeles has won five in a row and 10 of 12 overall, but still hasn't gained any ground on NL West-leading San Francisco, which holds a four-game lead over the defending World Series champions.


"We've got to continue to play good baseball. I still really don't feel like we've played our best baseball," Dodgers starter David Price said. "Can't really worry about what the Giants are doing. We need to keep our foot on the gas."

The Pirates dropped their fourth in a row and have lost 14 of 16.

"They've all been available and whenever they're out there, they're down in the strike zone and not walking guys," said Price, who has worked out of the bullpen at times this season. "They've been really good for us for quite a while now."

Kenley Jansen gave up a run in the ninth, when the Pirates had the potential tying run at second. But then Jansen retired the final two batters to finish off his 25th save.

"It's frustrating because of the fact that you don't finish it," Pirates manager Derek Shelton said.

Price set down his first seven batters in his 10th start of the season. He allowed two runs and three hits in 4 2/3 innings, struck out three and walked one.

"It just seems like when he's out there, we just don't play our best defense," Dodgers manager Dave Roberts said.


After homering in eight of their last nine games, the Dodgers played small ball. They had five doubles, including a pair by Corey Seager.

Beaty threaded a double down the right-field line off Cody Ponce (0-3), giving the Dodgers a 4-2 lead. Seager led off with a ground-rule double and two outs later, AJ Pollock walked to set up Beaty.

Los Angeles took a two-run lead on Pollock's single to shallow center field in the third.

The Pirates tied it at 2 in the fourth. Bryan Reynolds doubled to deep center, scoring Ke'Bryan Hayes from first. Reynolds scored when Jacob Stallings grounded into a fielder's choice to third, and Stallings was safe at second on Gavin Lux's first error of the game. Lux's throw skipped behind the plate, forcing catcher Will Smith to reach into the path of Reynolds.

"Reynolds smoked some balls and we don't get anything for that," Shelton said. "Sometimes that's just how baseball goes and tonight it went their way."

Lux, activated off the injured list Tuesday, committed his second error with two outs in the fifth. He fielded a ball hit by Kevin Newman near the third-base line and airmailed the throw to first, allowing the Pirates to extend the inning.


Dodgers: Lux started at third base for the first time in his major league career in place of Justin Turner, who pinch-hit in the sixth. ... OF Mookie Betts (right hip inflammation) will begin baseball activities Thursday. He's already been working in the weight room. ... LHP Clayton Kershaw (left elbow inflammation) threw from 60 feet and will progress to a bullpen session at some point.

The Pirates faced a left-handed starter for the sixth straight game, the first time that's happened to the club since 1932. They went 1-5 in that stretch.

Pirates: RHP JT Brubaker (4-12, 5.13 ERA) makes his team-leading 22nd start in the series finale. He's lost eight straight decisions and nine of his last 10 since his last win on May 11 against the Reds.

Dodgers: RHP Mitch White (0-1, 3.86) will pitch the bulk of the game, but it's possible someone else will open.