Chargers to stay in San Diego for 2016; long-term plan still up in air 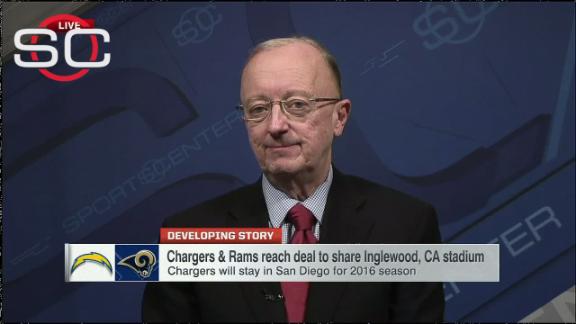 SAN DIEGO --Chargers chairman Dean Spanos said Friday that the team will stay in San Diego for the 2016 season but has an agreement with the Rams to move to Los Angeles if a long-term stadium solution to remain in the city isn't worked out.

Spanos delivered the news in a message to Chargers fans posted on the team's website.

"Today I decided our team will stay in San Diego for the 2016 season and I hope for the long term in a new stadium," he said.

"I have met with Mayor [Kevin] Faulconer and Supervisor [Ron] Roberts and I look forward to working closely with them and the business community to resolve our stadium dilemma. We have an option and an agreement with the Los Angeles Rams to go to Inglewood in the next year, but my focus is on San Diego."

According to the relocation agreement between the teams, the Chargers have a one-year window that ends on Jan. 15, 2017, to move to Los Angeles as the second team at the Inglewood project, which is set to be completed by the 2019 season. The Chargers can extend that option to Jan. 15, 2018, if a referendum for public financing in San Diego is not approved before Nov. 15 of this year.

"We look forward to partnering with the Chargers in Inglewood, but the decision of course is Dean's to make," Rams owner Stan Kroenke said in a statement.

The Chargers believe they could know within two to three months whether a new stadium deal is realistic in San Diego, sources told ESPN's Jim Trotter.

Faulconer and Roberts met with Spanos at his La Jolla home Friday. They contend that building a new stadium at the Qualcomm site in Mission Valley would be quicker and cheaper than the Chargers' desire to build a stadium downtown as part of a noncontiguous expansion of the convention center.

A spokesman for Faulconer said Mark Fabiani, who has led the Chargers' stadium push for 15 years, was not at the meeting. It wasn't immediately clear whether Fabiani, who has attacked Faulconer's proposals for the past year, will be involved when negotiations resume.

"We appreciate Mr. Spanos' commitment to staying in San Diego for the 2016 season to work with the region on a stadium solution,'' Faulconer and Roberts said in a joint statement. "We look forward to discussing his vision for a new San Diego home for the Chargers, and will be working with him and our negotiating team on a fair and viable plan to put before voters. We have agreed to meet again in the near future.''

In a statement, NFL commissioner Roger Goodell "pledged the league's full support" in helping Spanos keep the Chargers in San Diego. Some of that support will come financially.

When NFL owners approved the Rams' move from St. Louis to Los Angeles earlier this month, the league gave the Chargers and Raiders, who are looking to move out of Oakland, an additional $100 million in financial support for a new stadium if they stayed in their home markets. The Chargers would receive an additional $200 million as a loan in G-4 money from the league's stadium fund.

If Spanos' desire to remain in San Diego is realized, the Chargers would have that money for a new stadium.

"This has been our home for 55 years, and I want to keep the team here and provide the world-class stadium experience you deserve," Spanos said in his letter to fans. "Everyone on both sides of the table in San Diego must now determine the best next steps and how to deploy the additional resources provided by the NFL. I am committed to looking at this with a fresh perspective and new sense of possibility."

The Raiders, meanwhile, have an option to join the Rams in Inglewood if the Chargers decide not to, but that option will be on hold until the Chargers find a long-term solution in San Diego.

Chargers wide receiver Keenan Allen said fans need to show their support now that the team is staying in San Diego, at least for 2016.

"I know this has been an emotional ride for many with all the uncertainty, but I hope everyone respects and understands to an extent what an owner and team has to do for the organization," the quarterback told Chargers.com. "I know this has been a roller coaster, and as a player, I focus on what I can control. But hopefully the fans as a community won't get caught up in all that has happened and can get fired up for a 56th season in San Diego. Hopefully they can get fired up about being a part of this community for another year, and hopefully many more."

The Chargers have been trying to replace Qualcomm since 2002, but numerous upheavals at city hall and the economic downturn in 2008 contributed to a lack of momentum. The long-running saga turned nasty in the past year, as Fabiani fiercely opposed Faulconer's proposals. Spanos' scorched-earth tactics, orchestrated by Fabiani, angered many fans, who nonetheless turned out for what many thought was a farewell game when the Chargers beat the Dolphins at home on Dec. 20. 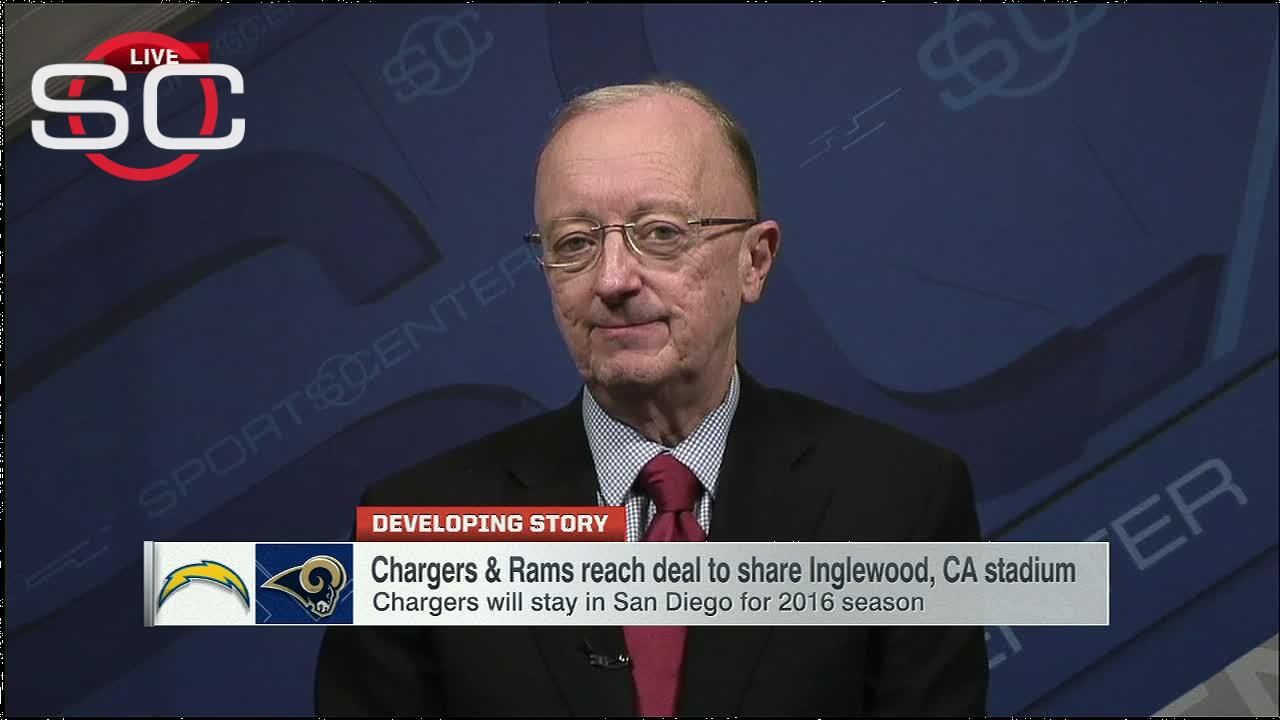