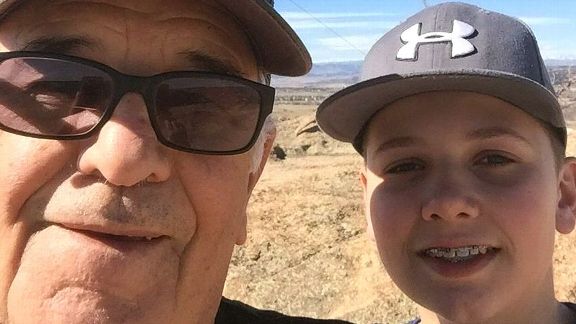 Dan Smoker Sr. still does not know that Carolina Panthers running back Christian McCaffrey was among the seven people who rescued him after he suffered life-threatening injuries in a fall during a Saturday hike with his grandson at Castle Rock, Colorado.

Smoker Sr., 72, remains in critical but stable condition at Sky Ridge Medical Center in the Denver area, even though on Tuesday he was taken off the ventilator he had been on since the accident.

Smoker Sr. suffered a broken femur, pelvis and neck, nine fractured ribs and bleeding on the brain from the 20-foot fall.

Dan Smoker Jr. said his father was able to say his name on Tuesday but otherwise hasn't fully come out of the sedation he has been under since the accident.

He said it likely will be the end of the week before his father is lucid enough to be told that McCaffrey and his brother, Max, a wide receiver with the San Francisco 49ers, were among those who helped save his life.

"I can confidently say between the seven of them they saved my dad's life,'' Dan Jr. told ESPN. "And the way they've come around my family since then has truly been amazing.''

Smoker Jr. said Christian McCaffrey and members of his family, including his parents, Lisa and Ed, have come to the hospital twice to follow up on the senior Smoker. McCaffrey texts 13-year-old Eli Smoker, who was hiking with his grandfather, daily for updates.

Smoker Jr. was with his wife in San Diego celebrating their 15th wedding anniversary when Eli called in a frantic voice to let them know about the accident. Eli didn't realize until Sunday afternoon, after he was joined by his parents at the hospital, that two of those in the rescue group were NFL players and local heroes.

The McCaffreys not only followed up on the accident with visits to the hospital but also brought food.

"A lot of people would have come to his aid at the site, but what they've done since is above and beyond that,'' Smoker Jr. said of the McCaffreys and others who have reached out.

Smoker Sr., from Cincinnati, was in town visiting his grandson. His family expects him to be in Colorado for at least three months recovering before he is fit enough to return to Ohio.

"We're sadly -- maybe not sadly -- but we're Bengals fans,'' said Smoker Jr., who moved to Colorado a few years ago. "We were joking around that we'll be keeping a close eye on the Panthers and 49ers this year.''
Report a correction or typo
Related topics:
sportsespnchristian mccaffreysan francisco 49ersmax mccaffreycarolina panthersnfl
Copyright © 2021 ESPN Internet Ventures. All rights reserved.
More Videos
From CNN Newsource affiliates
TOP STORIES