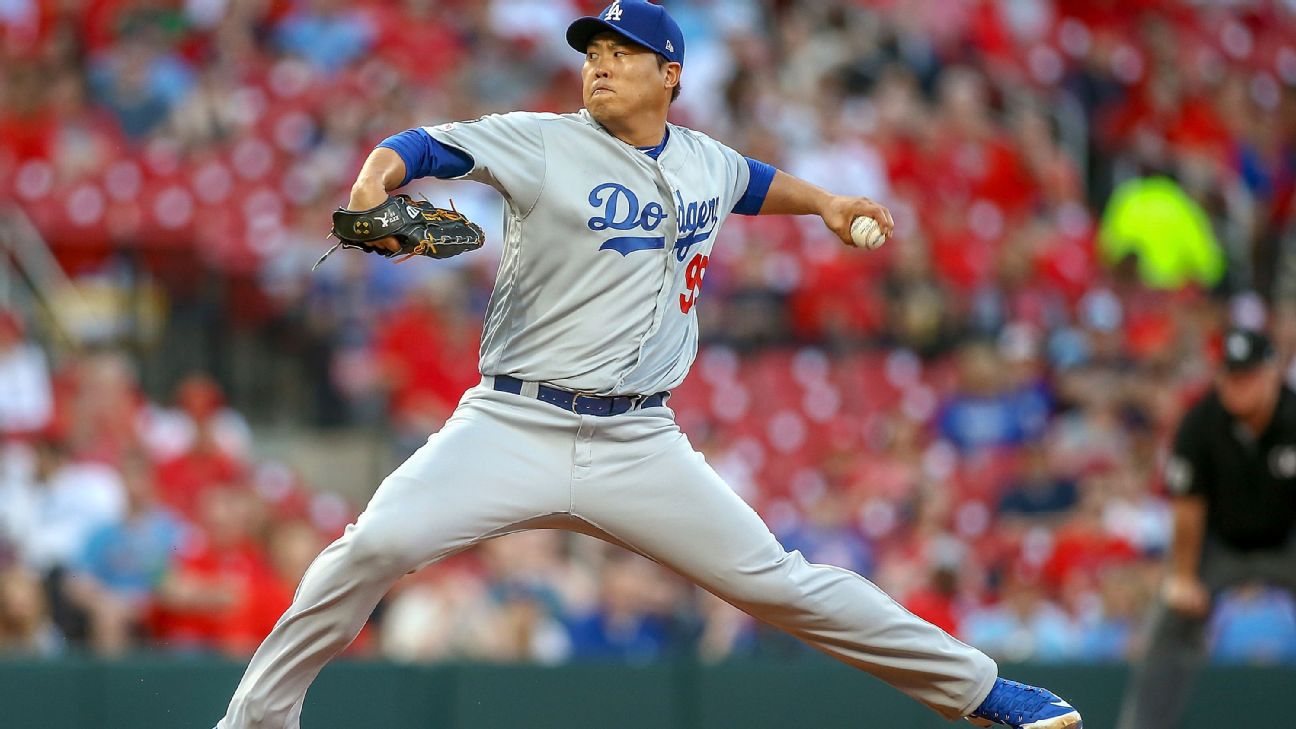 ST. LOUIS -- Los Angeles Dodgers left-hander Hyun-Jin Ryu is likely headed to the injured list after he was removed from the second inning of Monday's game in St. Louis with a left groin strain, according to manager Dave Roberts.

Ryu had just delivered a strike on a change-up to Cardinals pitcher Miles Mikolas in the bottom of the second when he immediately waved at the dugout for Roberts and the club's medical staff to come onto the field. After a brief conference on the mound, Ryu was removed from the contest and replaced by reliever Dylan Floro.

The Cardinals went on to win 4-3, snapping the Dodgers' five-game winning streak.

The scene was an unsettling one for the Dodgers. Last season, Ryu missed three months because of a similar injury, though the pitcher termed his early exit on Monday "more of a precautionary measure." Nevertheless, Roberts said an injured-list stint is all but certain.

"The positive right there, in talking to Hyun-Jin and the training staff, [is its] certainly not near what it was last year," Roberts said. "I think we'll know more with some more testing and just a night's sleep, and how he responds tomorrow, and how he responds to treatment. Obviously, it's an [injured list] situation. For how long, that's to be determined."

Ryu, 32, was making his third start of the season. He entered Monday with a 2-0 record and a 2.08 ERA. The injury is ill-timed for Los Angeles' short-handed rotation, already missing longtime ace Clayton Kershaw (shoulder) and lefty Rich Hill (knee).

Ryu's departure briefly had the Dodgers considering the option of having Kershaw make his next start with the big-league club. Kershaw is scheduled to start for Double-A Tulsa on Tuesday in a rehab outing.

"We talked about it," Roberts said. "Obviously that was in play. Right now, the long view, what makes the most sense for our ballclub, for Clayton, we're going to have him stay the course and have him make that rehab start in Tulsa."

Ryu optimistically said that he planned to prepare as if he would make his next start, a notion that Roberts dispelled a few minutes later.

"I just don't think with where we are right now, with the bullpen, we just don't have that luxury," Roberts said. "Where the 'pen has a guy who isn't going to pitch for another four or five days."

There was one immediate consequence of Ryu's injury that continued one of the few troubling early trends for the red-hot Dodgers, who have won eight of their first 11 games to begin the season while averaging nearly eight runs per outing.

Struggling reliever Joe Kelly, a key free-agent pickup for the Dodgers, was supposed to have the night off after a rough outing at Colorado on Sunday night. Instead, with Roberts needing to cover Ryu's innings, Kelly volunteered himself and was brought in to pitch in the sixth with the tying run on first base and no one out.

Kelly promptly walked St. Louis' Paul Goldschmidt, allowed a game-tying single to Jose Martinez and uncorked a wild pitch that allowed Goldschmidt to score what turned out to be the winning run. Kelly has now blown three save chances and has taken two of Los Angeles' three defeats on the season.

"You look at the stuff, and the stuff is really good," Roberts said about Kelly. "I certainly applaud him for calling down to the dugout and wanting to take the baseball after last night, and appreciating our starter [was hurt]. It shows this guy wants the baseball. I think right now, some pitches are just kind of finding the outfield grass."

However, the news wasn't all bad for the Dodgers on Monday. Earlier in the day, Cody Bellinger was named the National League's player of the week. Then Roberts told the media before Monday's game that if Kershaw's second minor league rehab start goes well, the ace would rejoin the team when it returns to Los Angeles this weekend.

But the best news of all was probably regarding the severity, or the lack thereof, regarding Ryu's injury. That news was delivered by the lefty himself after the game, as he insisted that this injury felt much different than the one that cost him so much of the 2018 campaign.

"I feel like there is a big difference," Ryu said, via a team interpreter. "Last year, I knew it was a pretty severe injury. This year, it was more of a precautionary measure. Just wanted to be cautious. It just feels different."
Report a correction or typo
Related topics:
sportsespnmlblos angeles dodgershyun jin ryu
Copyright © 2020 ESPN Internet Ventures. All rights reserved.
More Videos
From CNN Newsource affiliates
TOP STORIES