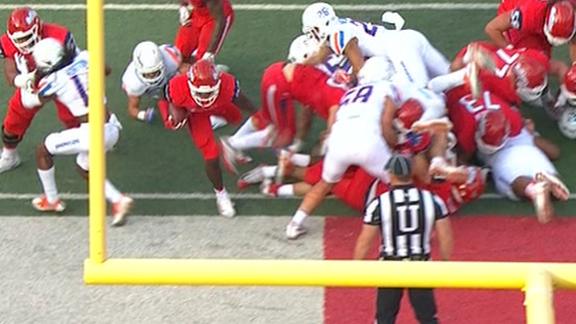 FRESNO, Calif. -- Fresno State beat No. 25 Boise State 28-17 on Saturday in a preview of the Mountain West title game. That much is decided and done with.

Just don't ask Bulldogs coach Jeff Tedford where the rematch should be played. Hired to turn around a 1-11 program last November, Tedford is happy enough his bowl-bound team is still playing.

All he knows for sure is West champion Fresno State (9-3, 7-1) will play Mountain winner Boise State again in one week. They all find out who will host Sunday morning, according to conference officials, who will use four computer rankings, and not Saturday's head-to-head result, as a deciding factor.

"I'm not a lobbyist," Tedford said. "It's out of our control. We didn't go into this game thinking if we win this game, we'll get home-field advantage. We didn't even talk about that.

What Fresno State has done is unprecedented by its recent standards.

The Bulldogs' eight-win improvement is best in the Football Bowl Subdivision. They beat a nationally ranked team for the first time in 22 tries dating to December 2004. It is the first time in nine games they've beaten a Top 25 Broncos team.

Fresno State did it with a defense that stayed true to its 17.3-point scoring average against a Boise State offense that leads the Mountain West in scoring.

The Broncos failed to score in three of four drives into Fresno State territory in the first half. One-thousand rusher Alexander Mattison was held to 65 yards on 15 carries.

Good luck picking a player of the game. Seven Fresno State defenders had between five and eight tackles, meaning someone was always making a play, even if it was no one in particular.

"We just made mistakes," Mattison said. "They did what they wanted to do against us."

If the Broncos wish to win the rematch, finding a solution to quarterback Marcus McMaryion is a great place to start.

The Oregon State transfer threw for a career-high 332 yards and two touchdowns, with the tops being an 81-yard strike to KeeSean Johnson for a 26-17 lead midway through the fourth quarter.

McMaryion added four scrambles for 27 yards, but mostly opted to throw short passes to keep drives alive. Sixteen of his 23 completions were on passes thrown for 9 or fewer yards.

Boise State cornerback Tyler Horton played with McMaryion in high school. He knew the moment McMaryion transferred to Fresno State that the Broncos would no longer rule the Mountain West with ease.

"When he came over here, I knew he was going to help their program," Horton said. "I always knew he was a great quarterback. It was nothing new to me."

All that remains undecided is where to play Round 2. Tedford and his players insist it does not matter to them. Boise State coach Bryan Harsin said he thinks it should be in Boise, but understands a coach's opinion doesn't matter at this point.

"Now we get to do it again," Tedford said. "We'll just play where they tell us to play."

Boise State: The Broncos needed seven straight wins to crack the Top 25 this past week. Saturday's loss not only ended their stay prematurely, but it ruined their hopes of being undefeated in the Mountain West for the first time. Boise State gets a rare "do-over" with a Mountain West title rematch, and promises to attack that game with a different plan. "Whatever we did leading into this game, it didn't work," Harsin said. "You won't see us do that again."

Fresno State: The Bulldogs' defense passed its most challenging conference test with A-plus honors, which bodes well for any rematch. With no big-name stars in the lineup, Fresno State presents a challenge because there is no one player to game-plan against. Defensive tackle Malik Forrester showed up best Saturday with a quarterback sack and a safety, but it was rare to see any player make two big plays in any given series. "You've got to be aggressive," Tedford said, "and our kids are."