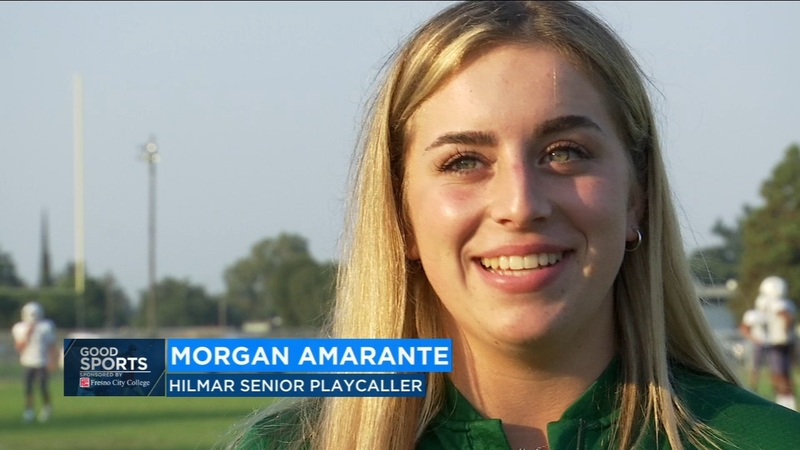 FRESNO, Calif. (KFSN) -- Caught between being too far from Fresno and too far from Sacramento sits a story we're pretty sure isn't being done anywhere else.

Frank Marques is in his 16th season as head coach of the Hilmar football team.

"I had a coach once tell me 'I can't believe you trust 16 to 17-year-old girls with that kind of responsibility.' But they've been awesome. They've been fantastic," said Frank Marques.

It started four years ago after players and coaches were absent. Marques needed someone to signal plays to his team. A former water girl was at the right place at the time. Marques gave her a chance to signal plays for the team.

"It was just kind of interesting because we've never had girls calling plays before but we just kind of adjusted to it," said Ryan Teixeira.

One girl signals the formation. Another play. Two more give signal decoys.

"We rotate those because people picking up on the signals. So only the players know which ones are live every series."

Knowing to signal the subs.

The girls are an extension of the coaching staff.

"Even a couple times they've corrected me on the wrong formation of the play so they really understand what's going on and are really a big asset to the program."

Senior Morgan Amarante has been doing it for three years.

"It was really nerve-racking because you don't want to be the reason why they miss a sign or something," said Morgan Amarante.

But she has a trick to memorizing the playbook.

"For me, it's kind of easier because I've caught and so with catching I kind of understand signals and stuff like that."

This whole setup, bringing success on the field.

There you go Issac!

Last year the Yellow Jackets won a section title and played for a state championship.

"I wish I was that smart that I was trying to make some kind of gender or equality thing but it was just out of necessity that it worked out. I think the gender doesn't really matter. They just do a really good job and they're really professional with what they do."

As for breaking gender barriers.

"We are in a way because we're not just like we're not handing out water bottles or things like that. We're more important than that."